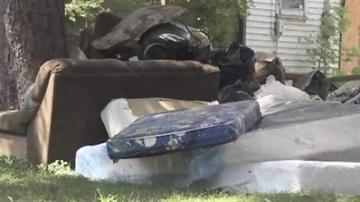 SOUTH BEND, Ind. -- Digging deeper into the trash problem on South Bend's west side, we spoke with Code Enforcement to see what they are doing to combat the problem. They said they have already collected several million pounds of trash so far this year, but there are many things that stand in the way of a permanent solution.

Take a quick drive through South Bend's west side and you'll see piles of trash. It has been a problem for years. We asked Code Enforcement what's being done about it.

Brian Haygood, Chief Inspector for South Bend Code Enforcement, is in it for the long haul.

"It's a marathon, not a sprint," said Haygood.

He's working tirelessly to solve an issue with no immediate end in sight.

"The amount of debris we're taking off is still very high," said Haygood.

Code Enforcement has picked up 3 million pounds of trash this year -- only to have that garbage pile up elsewhere the very next day.

Part of the problem is getting big banks like Fannie Mae and Freddie Mac to manage their own property.

"If you can't get the big banks to cooperate, it's going to be difficult to get the private citizens to follow suit," said Haygood.

His department takes this issue seriously by citing property owners who fail to comply.

Haygood says hundreds choose to ignore that and put the city in a difficult position.

It needs state and federal help.

We called local legislators, congressmen and congresswomen to see what they're doing about it.

We didn't hear back from everyone, but the ones who did return our call say they're looking into it.

Officials say when someone walks away from a property and the citations, it's hard to hold them accountable.

It takes weeks, months and sometimes years to track them down.

And even then - options are limited. Suing everyone who doesn't comply would be costly.