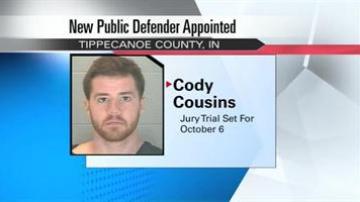 TIPPECANOE COUNTY, Ind. -- The man accused of killing a 21-year-old Purdue student in January was in court Thursday morning.

Cody Cousins was appointed a new public defender after he told the judge he no longer wanted his attorney to represent him.

He told the judge he and his lawyer had a conversation early last month, after that conversation he could no longer trust his attorney.

Cousins' trial is slated for October.