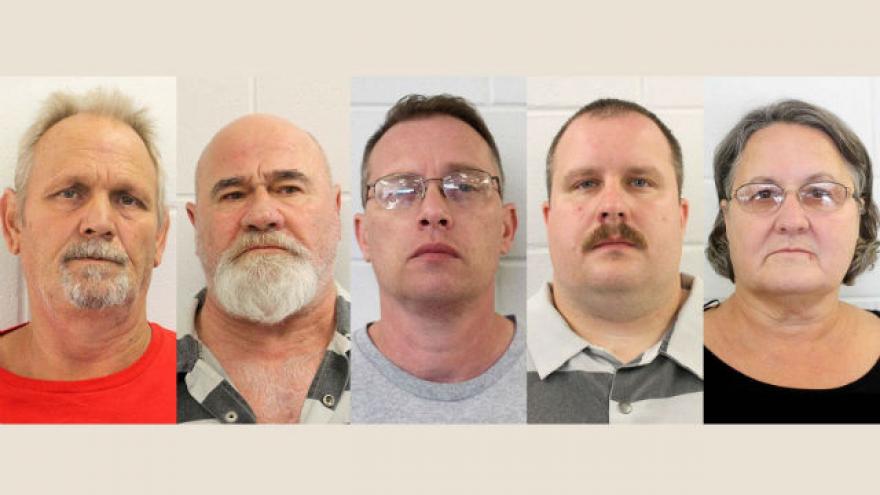 (CNN) -- Heather Coggins was 6 years old when her Uncle Tim was killed in what police say was a vicious, racially motivated murder in the tiny hamlet of Sunny Side, Georgia.

She now has justice in her crosshairs.

On Friday, authorities arrested five people -- two of them law enforcement officers charged with obstruction -- in Timothy Coggins' death, closing the cold case almost 34 years to the day after he was "brutally murdered and his body abandoned," Spalding County Sheriff Darrell Dix said.

With Timothy Coggins' family members -- one of them holding a program from Timothy Coggins' 1983 funeral at a Methodist church -- standing alongside police and prosecutors, Heather, the daughter of Coggins' oldest sister, thanked local and state investigators "for not giving up on my uncle Tim."

She lamented that her grandparents weren't alive to see the arrests and said that even on her deathbed in February 2016, Timothy Coggins' mother "knew that this day would one day come."

"The worst is over," Heather Coggins said. "Although it's been 34 years, we have always wanted justice, held out for justice and knew that one day we would have justice. ... We are eternally grateful you guys didn't give up."

On October 9, 1983, Timothy Coggins' body was found near a high-tension powerline in Sunny Side, a town about 30 miles south of Atlanta that today boasts fewer than 140 residents.

Neither authorities nor the family released much personal information about the 23-year-old victim. Dix said he was well-loved by his family.

"He was not 100% perfect, but you know what? He was the victim of a murder, and he deserves justice just like everybody else does," the sheriff told reporters.

The details and motive of the crime also remain murky -- Dix said he worries that divulging too much information may hamper the prosecution -- but in July the sheriff called Coggins' demise "just a horrible, torturous death," according to CNN affiliate WGCL.

He added, "If this crime occurred in 2017 it would without a doubt be classified as a hate crime."

During the summer Dix seemed to have tremendous confidence in his case. He issued a warning to the then-unnamed suspects and accused them of threatening and intimidating witnesses for years.

"Those people need to understand that we're coming for them," he told the station. "I feel right now that we are closer than the Spalding County Sheriff's Office was 34 years ago, by far."

On Friday, Dix made good on his promise as his office announced five arrests in the case:

Sandra Bunn, 58, is charged with obstruction;

Lamar Bunn, 32, is charged with obstruction;

Gregory Huffman, 47, is charged with obstruction and violation of oath of office.

Huffman was a Spalding County Sheriff's Office detention officer until Friday, when he was fired, Dix said.

Lamar Bunn formerly worked for the Lamar County Sheriff's Office and is now a part-time officer with the police department in Milner, about a 25-minute drive south of Sunny Side. He has been suspended without pay pending the outcome of the investigation, interim Milner Police Chief Michael Bailey said.

Gebhardt and Moore have criminal records, Dix said. Court documents show Gebhardt has been arrested numerous times and has three convictions for aggravated assault, all since 1997. Moore was convicted of theft in 1978 and of criminal interference with government property in 1987, according to court reports. He has been convicted of DUI and under Georgia's habitual violator law multiple times, the reports say.

The charges against the Bunns, who are mother and son, and Huffman are not related to the actual murder, said Capt. Dwayne Jones with the Spalding County Sheriff's Office. Rather, "these charges originated as a result of information that was obtained when the investigation was reopened," he said.

Gebhardt, Moore and Huffman appeared in court Saturday. A judge denied Gebhardt and Moore bond and set Huffman's bond at $35,000. The Bunns were released on bond Friday night, according to a news release.

It's unclear if Gebhardt and Moore have retained counsel. According to the sheriff's office, they were not appointed attorneys Saturday. The public defender's office for the Griffin Judicial Circuit declined to say whether it was representing any of the suspects, and public defender W. Allen Adams did not immediately respond to a request for comment.

"When interviewed, many of the witnesses stated they had been living with this information since Coggins' death but had been afraid to come forward until now, or had not spoken of it until now," the sheriff said.

Detectives executed search warrants to seize evidence and documents related to the case Friday, he said, adding that the investigation remains ongoing.

Spalding County District Attorney Ben Coker told reporters he couldn't comment on the case and he isn't sure whether he will pursue the death penalty for Gebhardt and Moore. He will make that decision after reviewing the evidence and the results of various tests that have yet to be completed, he said.

"I can assure you we will work hard to successfully see that justice is done," Coker told reporters.

No one from the US Justice Department has contacted him about the case, he said.

In announcing the arrests Friday, Dix again sounded confident in promising justice for Coggins and his family.

"Our thoughts and prayers are with Timothy Coggins' family, and we will support them and stand with them as the prosecution of his murderers moves forward," he said. "We are going to make sure people answer for that crime."