Cold weather can be bad for your health 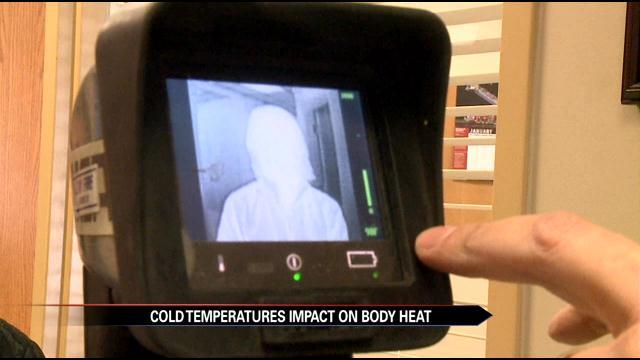 Sunday was one of the coldest days Michiana has seen so far this winter, and with these colder temperatures come problems for those who have to brave the elements to get their jobs done.

Without proper winter attire the elements could pose a threat to your skin.

Garrett Czosnowski knows all too well about braving the temperatures day in and day out.

He delivers for Dine-In food service.

As simple as that sounds, the cold temperatures affect Czosnowski despite the short time he is outside.

“Oh, I would say less than a minute. I mean if you're really going without gloves anywhere outside especially when it's windy, you can feel in literally ten seconds,” said Czosnowski.

It only takes a few seconds for your body temperature to drop.

So we went to the Clay Township Fire Department to do a little experiment with their thermal imaging equipment.

“Basically senses a difference between heat and cold. And then it's going to transfer onto the screen here so anything that is warmer is whiter and anything that is colder is going to be a darker color,” said Christ Martin, a lieutenant at the fire station.

For a reference point the experiment began inside.

“Right now she's about 98 degrees, which is going to be your normal temperature,” said Martin.

Even colder than that were her fingers.

That is why proper weather attire is important, especially for those like Czosnowski, who have no choice but to be out in these conditions.

“The best thing is to have it, to have it and not need it than need it and not have it, by far,” said Garrett Czosnowski.
Share this article: