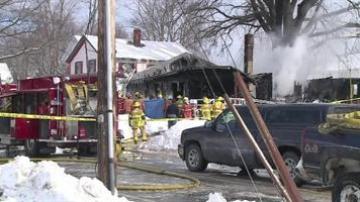 Firefighters battled the elements and flames for several hours, but in the end, their efforts weren't enough to save the lives of four people trapped inside.

"Our biggest challenge is with the cold, and the water, and the freezing," said Mike Young, Three Oaks Fire Assistant Chief.

"We have no de-icer. Mother Nature is our de-icer or that warm water coming out of that fire hydrant at about 40 degrees," said Ed Lijewski, Chief of the New Buffalo Township Fire Department.

The single digit temperatures took its toll on the equipment.

The fire burned out of control. At times, the smoke was so thick, the roof wasn't visible.

As the fire continued to rage, extra departments were called in to help rotate out gear and fatigued firefighters.

"It's very cold out here so their energy level I'm sure goes down quite quickly," said Kristine Wolfe of the Berrien County Red Cross.

Firefighters finally contained the fire eight hours after it was first discovered.

Crews will continue to monitor hot spots at the home to make sure the fire doesn't start up again.

The cause of the fire is still being investigated, but Michigan State Police said the house did not have working smoke detectors.