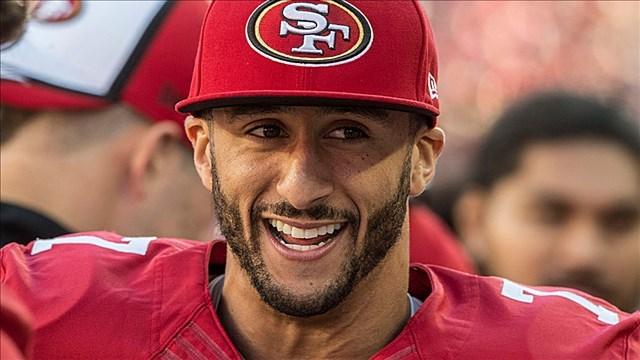 For his first start in almost a year, the San Francisco 49ers quarterback showed up Sunday wearing a T-shirt with a photo of Muhammad Ali on the front.

As has become his custom, he knelt on one knee while the national anthem played before the start of the game against the Buffalo Bills. A police officer stood behind him.

After he jogged onto New Era Field in Orchard Park, New York, for his first snap, the crowd greeted him with boos -- and not just because he played for the Bills' opponent.

Yes, this was more than a football game.

Kaepernick became one of the most famous athletes in the United States during the 2016 preseason when he began sitting -- then later kneeling -- during the US national anthem, saying he didn't want to "show pride in a flag for a country that oppresses black people and people of color."

His protest thrust the Black Lives Matter movement, which has mobilized nationwide protests and other civil actions against alleged police mistreatment of African-Americans, firmly into the NFL and started a national debate.

Was Kaepernick insulting Old Glory or -- by taking a knee -- using his First Amendment rights to stand up for the black community? Time magazine put him on the cover.

It was a lot of attention for someone who wasn't doing so great on the field. Once a hero for leading the 49ers to a Super Bowl, Kaepernick had been relegated to a bench warmer this season.

That changed Sunday. After weeks of watching quarterback Blaine Gabbert struggle, coach Charles "Chip" Kelly called on Kaepernick to start against the Bills.

"When Colin Kaepernick comes in to our house, he needs to show respect," C.J. Zimmerman told CNN affiliate WIVB. He's leading a movement for fans inside the stadium to sing the national anthem.

But a group called Just Resisting gathered outside the stadium and took a knee when the national anthem was played to show their support of Kaepernick, WIVB reported. "Stand up against racism," one of their signs said.

In terms of football, Kaepernick is under deep pressure. The 49ers have a 1-4 record this season.

Kaepernick hasn't started a game since November 1, 2015. Last season he had a 2-6 record as a starter under former coach Jim Tomsula before being benched in favor of Gabbert. Kaepernick was later placed on season-ending injured reserve with a left shoulder injury.

He's not the first athlete to call attention to racial injustice. In fact, American Olympians John Carlos and Tommie Smith famously raised their fists in a black power salute at the Summer Olympics on October 16, 1968 -- 48 years ago.

Kaepernick, who is biracial, started kneeling during the national anthem in preseason games to raise awareness about racial issues. Death threats poured in.

Then other athletes -- from elementary schools to professional sports teams -- began following his lead. Because it's a political year, his stance became enmeshed in politics.

GOP presidential candidate Donald Trump: "I think it's a terrible thing. And you know, maybe he should find a country that works better for him, let him try, it won't happen."

President Obama: "I think he cares about some real, legitimate issues that need to be talked about. ..."

Supreme Court Justice Ruth Bader Ginsburg: In an interview, she called his protest "really dumb" but later apologized, saying she should have declined to respond.

Kaepernick has not wilted under the attention. He sounded off a time or two himself, as when he called Trump and Democratic candidate Hillary Clinton "proven liars."

To people who say he's unpatriotic, Kaepernick replies: "I'm not anti-America. I love America. I love people. That's why I'm doing this. I want to help make America better."

The marketplace has an opinion, too. Though he hasn't been a starter recently, Kaepernick's No. 7 jersey has become the NFL's top seller.

Bleacher Report and CNN's Jill Martin contributed to this article.