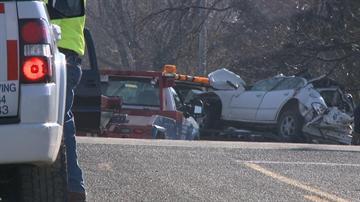 COLOMA, Mich. - Car parts are all that remains after a train collided with a vehicle in Coloma, Michigan Saturday morning.

"CSX was inspecting the tracks to make sure they weren't compromised in the collision, and it didn't appear they were," said Steve Vrablic, a Michigan State Trooper.

The car involved was headed north bound when it was struck by Amtrak Train 371, which was moving upwards of 70 miles per hour.

Two people were injured in the collisin, a 27-year-old Coloma male, and his four-year-old daughter.

"They were following a friend," said Vrablic. "So there was a friend there on scene, and then there was a train involved. All those factors together kind of compounded it, and made the scene that much worse."

Crossing guard lights and the train's horns appeared to be working at the time of the accident, police said.

It's unclear how the driver missed seeing the train.

"Residents who live near railroad tracks, who cross them everyday, can become complacent," said Vrablic. "They really need to pay attention."

None of the 140 passengers on-board the Amtrak train headed towards Chicago were injured.