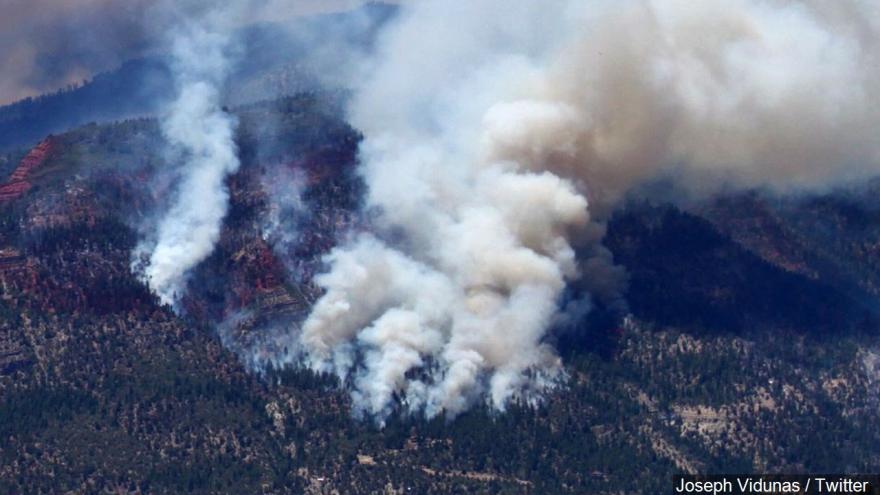 (CNN) -- Several wildfires in Colorado have prompted thousands of home evacuations and the closing of a national forest, fire officials said.

Nearly 1,400 homes have been evacuated in Summit County, Colorado, and over 1,000 other homes could be in danger as the Buffalo Mountain wildfire burns nearby, according to Summit Fire & EMS.

The fire began Tuesday about 2 miles west of Silverthorne, a town with about 4,700 residents and about 65 miles west of Denver. It has burned 100 acres in the Arapahoe and Roosevelt National Forest, officials said.

"We have not lost any structures at this point," the agency tweeted Tuesday.

The Buffalo Mountain blaze is one of at least six wildfires burning throughout the state.

The 416 fire -- the largest wildfire in the state -- has burned more than 23,000 acres in La Plata County near the state's border with New Mexico, county spokeswoman Megan Graham said.

The fire has only been 15% contained since it was first reported on June 1. More than 900 people are fighting the blaze, officials said.

No one has been hurt and no structures have burned down, Graham said.

US Forest Service official Jim Genung said that fuel breaks added to the forests in recent years have saved thousands of homes from "having fire in them."

The forest, which covers more than 1.8 million acres in western Colorado, announced the closure is intended "to protect natural resources and public safety."

"Under current conditions, one abandoned campfire or spark could cause a catastrophic wildfire, and we are not willing to take that chance with the natural and cultural resources under our protection and care, or with human life and property," said Richard Bustamante, SJNF forest fire staff officer.

Anyone caught violating the closure, SJNF said, could be punished with an individual fine of up to $5,000 or $10,000 for an organization, a six-month prison sentence, or both.

Gov. John Hickenlooper said the state was allocating many resources for the fires in the states.

"Our state agencies are here to support you. As we have proved time and time again, Coloradans are resilient," he said.

The 416 Fire began June 1 near Durango, Colorado. La Plata County Manager Joanne Spina declared a state of local disaster that day as a result of the fire, which led 1,500 residents to evacuate.

Graham said earlier that 2,162 structures or homes have been evacuated since the beginning of the fire, and 500 residents are currently on pre-evacuation.

The smoke from the wildfire has affected air quality, Graham said. Both state and local public health agencies have issued air quality advisories to stay inside until smoke clears, and have warned those who have health risks to be extra cautious.

The other West Coast wildfires

The 416 Fire was one of several West Coast wildfires that began around June 1.

The Ute Park Fire in New Mexico began May 31 and forced 2,200 people in the area to evacuate their homes within the first three days of the blaze.

On Tuesday, InciWeb, a federal database of US fires, showed the wildfire was 92% contained, and said Cimarron Canyon State Park will be closed through July 4. The Ute Fire has burned 36,740 acres.

No homes had burned, but 14 outbuildings have been destroyed.

A fire in California that burned almost 200 acres has been contained, officials said.