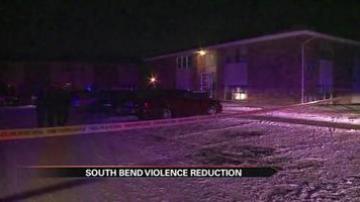 SOUTH BEND, Ind. -- The Anti-violence Commission met Monday to discuss ways to reduce gun violence in South Bend. There have already been several shootings so far this year.

In 2014, there have already been five victims.

Police and other city leaders say it's unacceptable and they're looking for new ways to reduce the gun violence.

Getting there is the hard part.

Monday, law enforcement, clergy and others with the Anti-Violence Commission talked about new strategies to reduce South Bend's crime problem.

"We cannot incarcerate ourselves out of this situation," said Clifford Johnson, First Assistant United States Attorney.

The strategy is called "Don't Shoot." it's modeled after a book written by David Kennedy.

It calls for more street outreach, job training and changes in sentencing for those who are connected to the crime.

"To not adopt this strategy, a proven methodology from other cities, is irresponsible. It is upon us to do that and to work with others in our community," said South Bend Police Chief Ron Teachman.

The hope is to reduce violence.

Sunday night, two men were taken to the hospital after a gunman fired into an apartment.

"It's not a deal, it's not a bargain, it's a promise," said South Bend Mayor Pete Buttigieg.

City leaders have seen some progress in the last year.

Police say the murder rate has been cut in half and shooting-related injuries are down by almost ten percent.

Still, many in the audience questioned why it isn't happening sooner.

"I wish we could move faster. But if given the choice between doing it fast or doing it right, I want to do this right," said Teachman.