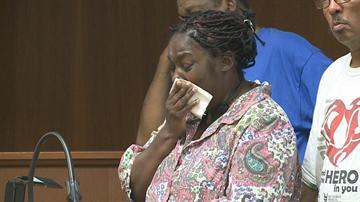 SOUTH BEND, Ind. – At Monday’s meeting of South Bend’s Common Council community activist group Citizens United for a Better Government reaffirmed their demand for the release of the tapes in the South Bend Police Department recording scandal and added more homicide cases and suspicious death investigations they wish to be investigated by organizations outside of St. Joseph County.

Stephanie Jones took to the podium to tell her side of the story regarding the death of her son, 16-year-old Jih’ad Vasquez.  Vasquez was found hanged in a field near Queensboro Street over one-year ago, three-days after being suspended from Penn High School for fighting with another student who allegedly called him a racist name.

"They said it was asphyxiation,” Jones explained, holding back tears.  “I think somebody killed my son."

For over a year Jones has remained adamant that her son was murdered, despite St. Joseph County Sheriff Mike Grzegorek and South Bend Interim Police Chief Chuck Hurley (who was acting as a coroner at the time) determining the death to be a suicide.  Jones is demanding an investigation into her son’s death, something that would be complicated because no autopsy was performed on Vasquez’s body and he was cremated within days of his death.

"I was so distraught,” Jones described, sobbing.  “No autopsy, no nothing."

Other members of Citizens United for a Better Government named numerous other “suspicious” death or unsolved homicide cases that they say point to a need for an outside evaluation and investigation into local law enforcement.  For some time now the group has been claiming that the controversy surround the racially tinged recording scandal and questions about 31-year-old Michael Anderson’s death while police custody are creating an atmosphere of mistrust in the community that could be dangerous for citizens as well as police officers on the street.

"You've got citizens in the city of South Bend who don't know what to think, what to believe and who to trust," claimed Mario Sims, President of Citizens United for a Better Government.  “It is our intention to continue protesting, we will increase the size, we will increase the frequency until justice is served in South Bend.”

Citizens United for a Better Government will be meeting on Wednesday to hold a large protest in September and they’re hopes to enlist the help of national organizations to help push for outside investigation into controversial cases in South Bend and the release of the tapes in the recording scandal.