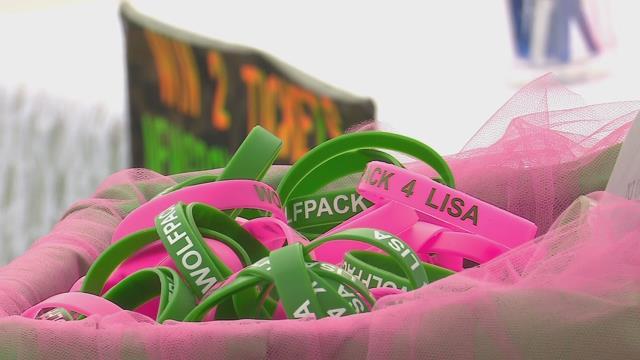 One Goshen woman has an incurable stomach disease—and the community is rallying to raise money for a potentially life-saving surgery.

“My problem is my stomach. It’s pretty much a holding tank for food poisoning in a sense, because every thing that’s there, again, just kind of rots,” said Lisa Wolf, who has gastroparesis.
Some of her friends hosted the event at Northridge, because Lisa Wolf’s husband is the Head of Maintenance for Middlebury Community schools.
“Pretty much my stomach doesn’t work. Anything that goes in my mouth, it just pretty much sits in my stomach until I vomit or I can drain it out of the tube that I have,” Lisa Wolf said.
“It’s like having the worst case flu every single day of your life, 24 hours a day, 7 days a week,” said her husband, Cliff  Wolf.
It’s called Gastroparesis.More people have it than you might expect. The National Institute of Health estimated that at least 5 million Americans are suffering from it today. That’s about the same amount of people that have Alzheimer’s, which you hear a lot more about.Lisa Wolf was diagnosed in 2013. Doctors think her diabetes caused it.“My sugars were so high for so long because of this condition, it killed the nerve that was in my stomach,” Wolf said.
Now, she uses a feeding tube, and has had 10 surgeries and procedures.“The worst part for me in my daily life is watching my children see me so sick. I hate it. I would give anything for them not to see me sick,” she said.
“I cried myself to sleep a couple times. Every morning it’s hard to get up and see her like that,” said her daughter Kali Wolf.
There’s hope, however, in the form of a Gastric Bypass.“It’s going to bypass the problem in a sense,” Lisa Wolf said.

However, her family cannot afford the procedure.
“As of right now, the insurance is not covering the procedure. That’s where we’ve kind of hit a road block,” said Wolf.
To help, her friends are hosting fundraisers.“I like to think that everybody can’t do everything, but everybody can do something, so I just decided that I knew them, and we needed to help her get surgery, so I just kind of jumped in,” said family friend Doug Edlund.
And her family is hoping this money can save the woman they love so much.“She is amazing. The world. The world,” said her husband Cliff.
If you want to donate anything to her family, you can do so by clicking on the following links:

Or, you can make a donation at any First Source Bank to the Lisa Wolf Hospital Fund.