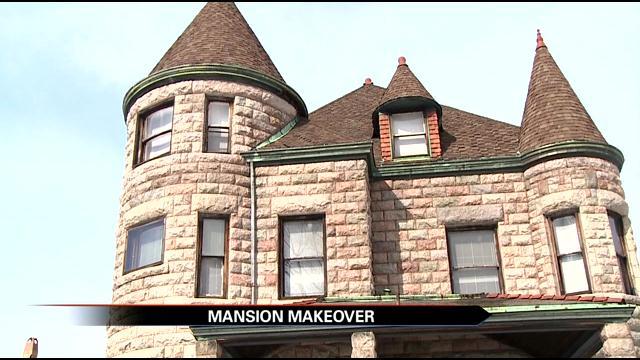 A local couple is turning a local landmark into a newlywed dream home.

And their home construction blog is causing quite a buzz in St. Joseph County.

Leah and Trent Runyon bought the home, then posted pictures online to show their parents.

Last week those pictures were seen by thousands of people after their Facebook page went viral.

“Originally it was just so our mothers could follow along,” said Leah. “And then it clearly became a little larger than that.”

Not even a full week after announcing the purchase of the property the Runyons had over 2,000 followers on Facebook and counting.

“It feels like it's such a huge corner in town that it feels fair to share it with the community,” said Leah.

In 2011 the Kizer Mansion was bought by the South Bend Redevelopment Commission with the hopes to turn the degrading building around.

Between the gaping holes, broken fixtures and thousands of dollars worth of electrical and plumbing work, this couple has yet to encounter a challenge they couldn't complete.

“We have no doubt that we can do it,” said owner Trent Runyon.

The plan is to fix up the former apartment complex-turned landmark and convert it to a single family home for the two.

They want to modernize the home while staying true to the building's Romanesque-revival style.

“From the original time frame of 1885 all the way through right now, I'd like to have pieces all throughout,” said Leah.

The 8,000 square foot mansion is something they want to share.

“We do consider this a privilege that we get to be a part of this and we are excited,” said Leah.

The Runyons say it could take more than two years and several hundred thousand dollars to finish the house.

In the meantime, they'll be staying on site in an apartment behind the building to save money.