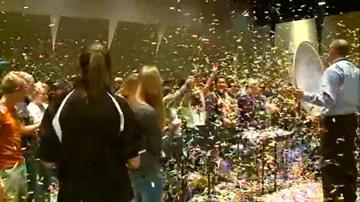 The band was selected from more than 150 applicants.

The students were surprised with the news on Tuesday, and said they had no idea what was going to be announced.

"Nope, nobody let it out," said Andrew Daeger. "It was a big secret and really exciting to wait for,"

The band will be one of 11 bands that were chosen to perform in next year’s parade. The students can’t wait.

"I think it'll be so much fun because being with the best group of people I can imagine, it'll great to perform to a whole nation instead of just little ole Indiana," said Elena Fischer.

The band director said they spent all of January filling out the application. He said he got an email in early March asking him to call the parade’s creative director. When he called he got the good news.