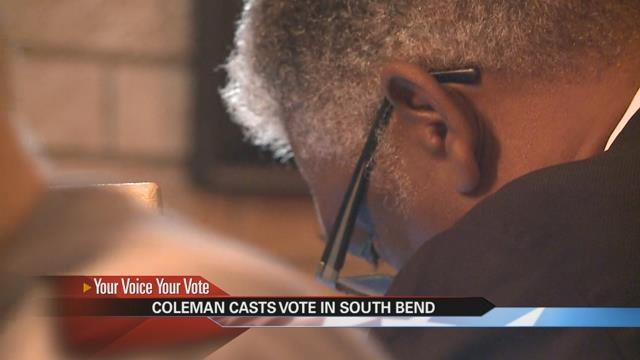 Election Day has finally arrived. Candidates on the Indiana ballot will make their way out to the polls to vote before they spend a full day of campaigning.

Lynn Coleman from Indiana's 2nd Congressional District is on the ballot for U.S Congress. He came out to vote just before 7 a.m. at Crest Manor Church of the Brethren.

Coleman is up against incumbent Jackie Walorski. If elected, he wants to see change in government.

"We're running because we care and we want to help. It's just as simplistic as that. We care about all the people in this district," said Coleman.

According to the Coleman for Congress Facebook, his life of service began years ago. He became a police officer in 1977 and said it was important that he not focus on number of arrests, rather focus on how many he can keep from getting arrested. He understands crime hurts families after he saw his older brother be sent to prison.

While on the police force, he was on the Special Operation Section and served as Commander of the Juvenile Division. After his time as a police officer, he served as a Special Assistant to the Mayor of South Bend for 12 years.

"For the last 40 plus years in this community, we have been involved in trying to make someone else's life better and in doing that it enhanced our lives. It gave us an opportunity to grow and to learn," he added.

To learn about the issues he stands for, click here.