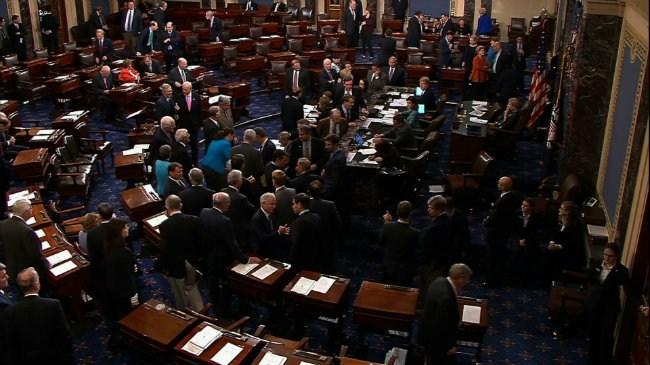 Just one day after these lawmakers led the first override of a veto during Obama's presidency they publicly called for making changes to the law. But even as they admitted they agreed with some of the White House's concerns, GOP leaders quickly blamed the President for "dropping the ball" for failing to engage with Congress on the legislation before it passed.

The White House didn't hold back in its criticism after both the House and Senate voted decisively on Wednesday to overturn Obama's veto of the Justice Against Sponsors of Terrorism Act, also referred to as JASTA. The President called the vote Wednesday "political" and his spokesman ripped the move as the "single most embarrassing thing" Congress has done in decades.

Echoing concerns raised by the White House that the measure could open the US to similar lawsuits from people in other countries, House Speaker Paul Ryan said the law needs to be changed to ensure that US troops are protected.

"I'd like to think there is a way we can fix it so that our service members do not have legal problems overseas while still protecting the rights of the 9/11 victims," Ryan said at his weekly news conference.

The speaker voiced his own reservations about the bill earlier this year, saying people needed to look at the unintended consequences. But he explained that he ultimately decided to allow a House vote on it because "you want to make sure that the 9/11 victims and their families get their day in court."

Asked if Congress would try to fix the law when it returns for a post-election session, Ryan replied, "I don't know."

"It appears there may be some unintended ramifications of that and I do think it's worth further discussing," he said. "But it's certainly is not something that was going to be fixed this week."

McConnell said Obama didn't reach out to him until this week, which was after the bill had passed both chambers, been vetoed, and was facing an override vote that clearly was going to succeed.

"That was a good example of the failure to communicate early about a piece of legislation that was obviously very popular," McConnell said.

McConnell explained that lawmakers were very focused on the needs of the 9/11 families and didn't take the time to think through the consequences.

"Because everyone was aware who the potential beneficiaries were, but nobody focused on the potential downside in terms of our international relationships. And I just think it was a ball dropped," McConnell said. "I wish the President -- and I hate to blame everything on him and I don't -- but it would have been helpful had...we had a discussion about this much earlier than the last week."

White House press secretary Josh Earnest blasted lawmakers for their second thoughts and said there were ample warnings from the administration of the dangerous consequences of the law.

"What's true in elementary school is true in the United States Congress: ignorance is not an excuse," Earnest said.

House Minority Leader Nancy Pelosi, typically one of the White House's strongest allies, voted to override the President's veto and told reporters she was never pressed by the President to help prevent it from being overturned.

She called the President's concerns about potential fallout with allies "legitimate" and acknowledged, "I do think that perhaps it could have been written in a little bit of a different way that addressed some of the concerns. The families did think that they made changes but not to the satisfaction of the President obviously."

Pelosi disagreed with the President's remark that it was a "political vote." While she said she didn't see his comments, she said the timing of Congress taking up the measure was because the families of the terror attacks pressed for it to pass around the 15th anniversary of the deaths of their loved ones.

Sen. Chuck Schumer, who is expected to be the next Democratic leader next year, is the chief sponsor of the legislation. The New Yorker said he was open to changing the law but not in any way that could hurt the 9/11 families, many of whom are his constituents.

"So I will look at anything," Schumer said at a news conference. "But it has to be something that doesn't weaken the bill and limit the rights of these families to get their day in court and justice."

Schumer spoke while standing next to Senate Minority Leader Harry Reid, who was lobbied this week by Obama to sustain his veto, and his was the lone senator to do so. Reid even read aloud to a meeting of his Democratic caucus a letter Obama had written to him outlining his concerns with the bill.

One senator who wanted to talk more about the legislation before it became law was Bob Corker, R-Tennessee, the chairman of the Foreign Relations Committee.

Corker said he tried to arrange a meeting this weekend with Senate leaders, Obama, and Secretary of State John Kerry to discuss "a better route" for the legislation.

"We were unable to get the meeting," a frustrated Corker said on the floor. "For reasons that still are unknown to me, that was not achievable. There was no desire whatsoever to sit down and meet."

Earnest said the White House had spoken to Corker.

"He's going to have to explain to his constituents why he supported a piece of legislation that he claims to harbor significant concerns about," Earnest said of Corker.

Corker spearheaded a letter Wednesday signed by 28 bipartisan senators raising concerns with the law and saying they would consider changes to it, a particularly unusual missive on the day the President's veto was turned back.

"Every one of those senators that signed the letter voted for the bill, including Sen. Corker. So obviously they thought it was better to have the bill than not," Schumer noted.

As for Obama calling his vote politically-motivated, Schumer rejected the charge.

'I look at the families, it's hardly political to me," Schumer said. "I've worked with these families for five years. I feel their pain."