Congressmen arrested for protesting over immigration outside Trump Tower 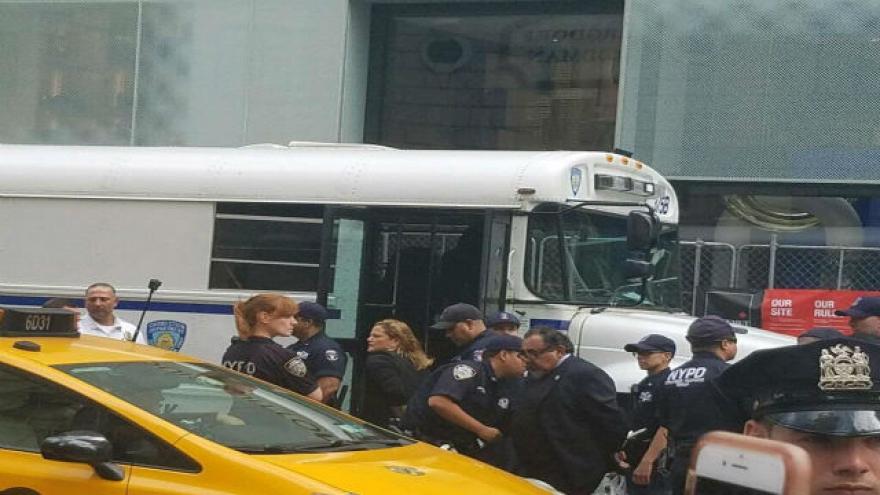 (CNN) -- Three congressmen were among a group of protesters arrested outside Trump Tower on Tuesday, where they were participating in a demonstration in support of immigrants and protections recently ended by the Trump administration.

Democratic Reps. Luis Gutierrez of Illinois, Raul Grijalva of Arizona and Adriano Espaillat of New York were arrested on civil disobedience charges along with the speaker of the New York City Council, Melissa Mark-Viverito, and six others, according to lawmakers' offices and Robin Levine, the spokeswoman with Mark-Viverito's office.

Grijalva's Facebook page posted pictures of the protests and arrests, including an image of the group locking arms and chanting as they sit in a street holding a banner.

"We're taking the necessary steps to make it clear to President (Donald) Trump, the Republicans and the Democrats that we will continue this peaceful fight for Dreamers and immigrants as long as it takes to enact legislation and put Dreamrs in a safe place," Gutierrez said in a statement provided by his office, using a term for those who would be aided by the implementation of the Dream Act immigration legislation.

The protest was focused on Trump's immigration agenda and his decision earlier this month to end the Deferred Action for Childhood Arrivals program, which was put in place under President Barack Obama and protected young undocumented immigrants brought to the US as children from deportation.

Congress is now debating how to save the program before a March deadline when permits issued under DACA will begin to expire. Democrats are advocating for the Dream Act, a bill from Sens. Dick Durbin, a Democrat from Illinois, and Lindsey Graham, a Republican from South Carolina. Republicans have expressed reservations about the path to citizenship in that bill, and are insisting any fix include border security measures at a minimum.

Espaillat was the first formerly undocumented immigrant to become a member of Congress, and Gutierrez is a longtime immigration advocate who has been arrested multiple times for protesting on the issue, including in August at the White House, in 2013 near the Capitol, in 2011 at the White House and in 2010 at the White House. He was also handcuffed at a sit-in at an Immigration and Customs Enforcement office in Chicago earlier this year.

The Tuesday Protest was organized by Make The Road New York and other New York pro-immigrant advocates, according to Gutierrez's office.