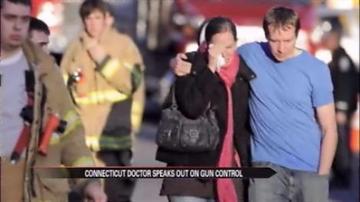 We've heard opinions on gun control from lawmakers, activists and even celebrities but what about people who see the result of this violence every day.

A doctor from Newtown Connecticut is speaking out on gun control.

He spoke to a Sandy Hook bi-partisan task force about stricter gun control laws and he had some stunning facts.

Other hearings are also being held examining how this mass shooting could have been avoided.