SOUTH BEND, Ind.—Construction is continuing on a new mixed-use building on South Bend’s East Bank even as winter arrives.

Developer and Founder of Matthews LLC, David Matthews, said that the crews of mostly local carpenters will continue working through cold and wet weather, though on windy days the crane is not able to operate.

“They’re laying between 40 to 60 yards of concrete per day,” Matthews said.

The $45 million development project at 300 E. LaSalle Ave. is not slated for completion until spring of 2021 but Matthews is already sharing his big plans for the space.

“It’s a mid-rise development in downtown South Bend with a grocery store, a parking garage, some Class A office space and 144 apartments,” Matthews said. 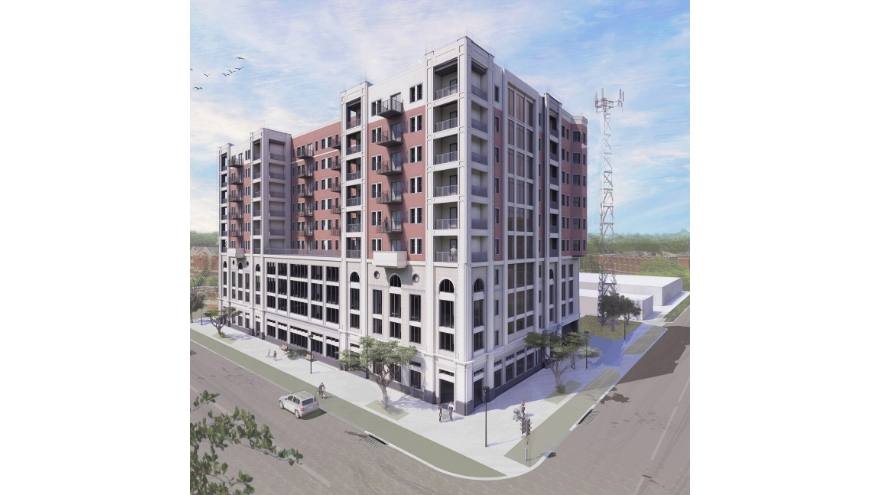 The 144 apartments will be a mix of one, two and three bedroom units. Most units will feature a balcony with gas hookups for grills.

On the first floor of the 10-story building, 15,000-20,000 square feet of retail space will be primarily occupied by a grocery store. Unused retail space left following the grocery store’s construction process will open up the opportunity for additional retail establishments.

A couple of hundred parking spots will be available in the building’s parking garage and about a hundred more spots will be included in a surface lot.

Matthews said the decision to build the development on LaSalle was simple.

“We’re trying to build up downtown South Bend,” Matthews said. “In order to have more customers for shops, for parks, for restaurants, we need more people living downtown in walking distance.”

Multiple city parks are within a 20 minute walking distance from the new development, including the newly renovated Howard Park.

Matthews has not shared what grocery store will live in the building, but he did say that the development will be more than just a place for the community to shop and live.

“It’s not just giving the people who live here a spot to go. It’s helping reinforce the urban fabric of downtown so when you visit or take a stroll along the East Race, there’s more people, there’s more restaurants, there’s more activity that makes downtown South Bend feel like a city we want to visit,” Matthews said.

Next door to 300 E. LaSalle, in the Atrium of the Commerce Center, another project of Matthews’ is headed to fruition.

“We’ve had a lot of people who visit and say I want to open a restaurant but they lack the financial means to do a restaurant buildout,” Matthews said. “How do you take someone who is driven and competent but doesn’t have the financial backing yet or the reputation to do a full fledge restaurant? Our approach is we’ve created three of these small restaurant incubators.”

Comparing it to the new ramen noodle bar inside of the Emporium building, Matthews explained that the three completed stalls will serve as venues of experimentation for those who want to give their culinary business ideas a test-run with month-to-month leases.

The idea is that within two years, or even sooner, the pop-up restaurants will have evolved to where they can afford and attain their own, more permanent, spaces, Matthews explained.

“We’re just trying to create that pathway for people to have a shot,” Matthews said.

One of the stalls is waiting for the first pop-up restaurant operator to set up shop while the other two await completion.

Down the hallway from the restaurant incubator, the local farmer-owned River Valley Farmers’ Market, which opened to the public in October, is already making big expansion plans.

“They’ll be tripling in size in the beginning of 2020,” Matthews said.