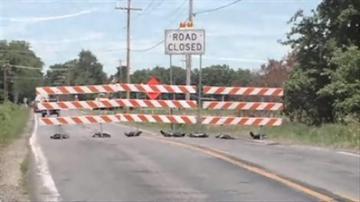 ELKHART COUNTY, Ind. -- It's just the first day of construction of the roundabout on the Elkhart-St. Joseph County line and already drivers, homeowners, construction workers and police are frustrated.

At the break of dawn, road signs went up and construction began on the new roundabout at CR 6 and W. County Line Road in Elkhart.

After the first few hours of construction some residents who live on W. County Line Road say they are already unhappy with drivers who cut through the construction zone. Some are also disappointed with what Gary Cole, the project manager told them about construction specifics recently.

One homeowner says even after Ash Road is reworked, it won't be paved in front of his house, something he says the county informed residents would happen weeks ago.

He says the county taped a letter to his door and his neighbors stating St. Joseph County would be paving the stretch of road even though the road is owned by both Elkhart and St. Joseph counties.

"To my left is St. Joseph County to my right is Elkhart County, our house is the second one here," said Larry Johnston.

He says the letter advised him to flag any sprinkler heads or other items he may have at the edge of his property so that construction of the new road would not damage his sprinklers, etc..

His neighbors said they got the letter too although none of them were willing to go on camera. Johnston and his wife Evelyn could not locate the letter when ABC 57 was at their home on Wednesday, therefore ABC 57 could not show the County or the project manager the letter they claim they received.

Gary Cole the project supervisor with The Troyer Group, the consultant firm on this project, says they didn't send the letter. He also says the plan does not call for paving the road as far down as the Johnston's home.

Andy Hayes with the St. Joseph County's engineering department says he is not aware who sent the letter and clarified that all roads will be paved within 1,500 feet of the roundabout. He says the Johnston's address does not fall within that proximity.

"They've never paved this road and it's very rough, And we get a large amount of traffic and semis come down here," said Evelyn Johnston who says they have lived on W. County Line Rd. for the past 7 years.

As ABC 57 News crews were leaving for the day the Johnston's provided us with a copy of the letter one of their neighbors saved. The letter was dated June 6th, 2013 and was sent from the St. Joseph County Dept. of Public Works. At the top of the letter are the names Jessica Clark, the County Engineer and the County Surveyor, John McNamara.

The roundabout project is expected to take about 2 months.