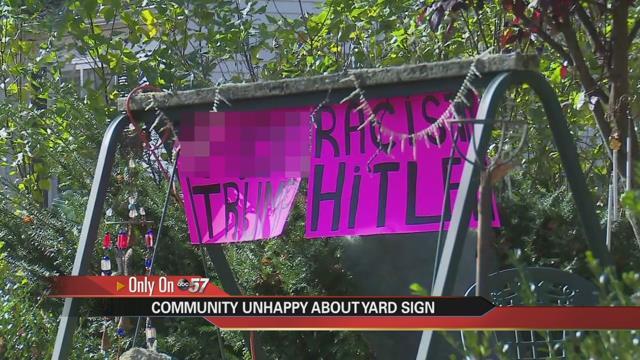 Protests are still happening all over the country, after Donald trump's victory in the presidential election almost a week ago.  Some of the protests aren't in city streets, but in the quiet suburbs.

The Oak Manor neighborhood in Niles woke up to a surprise Monday morning, after one neighbor hung signs with profanity, proclaiming anti-Trump sentiments.

The area is full of families, and parents were concerned that it was too inappropriate.

There's no doubt to anyone that Nancy Johnson is anti-President Elect Donald Trump.

"I debated several days if I should put it out there, because it does have profanities," says Johnson.  "And I thought, 'okay, well what was Trump doing? He was talking so nasty."

So, Johnson went with it.   Parent's were not too pleased.

Jacquelyn Kirk lives just across the street.   Her son headed to school in the morning, only to turn around and tell her what was outside.

"There's a bunch of cursing and stuff on it," says Kirk. "I don't think it should be allowed in a school zone."

Oak Manor Sixth Grade Center is in Kirk's backyard.  She also has six kids. Her twelve-year-old daughter, Jocelyn, is worried about her young siblings seeing those words.

"You really shouldn't use unnecessary language around little kids," she says.  "Especially when they're so tiny and they can learn from anything."

But Johnson believed she needed to take a stand, even though she knows its bothering people.

"It is. It's very offensive," Johnson says. "But Trump is offensive."

Others say, she could have done it without the language.

"We all have our political views," says Amanda Goble, who's son also saw the sign this morning.  "We should be able to express them freely.  But that language is not appropriate for children."

Although neighbors admitted they did not go to Johnson personally, asking her to take down the signs, they contacted the police department and Niles Township.

They were told there was nothing that could legally be done, because of freedom of speech.

Johnson did remove the most offensive sign, prior to ABC57 News at 5:30.