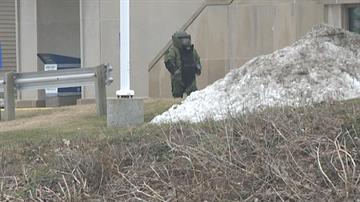 BERRIEN COUNTY, Mich. – A cookie caused quite the chaos at the Berrien County Courthouse on Wednesday. Courthouse security found a suspicious package by the main entrance, caused the entire building to evacuate.

Police were called just before 11:30 a.m. and some 100 people inside were sold to get out.

“You couldn’t use the elevators. They all had to go down the stairs,” said Brenda Peters.
Peters was in town from Wisconsin for a court date, and said a bailiff came in the room and told them to evacuate.
“So I get up grab my stuff couldn’t find my keys so my keys are up in the building and  I’m out here,” said Peters.
The bomb squad, including robot, were called in to get a closer look at the package.
“It was a small rectangle package in a brown paper bag, so it was suspicious in nature from its location and obviously the package itself,” said Berrien County Under sheriff Chuck Height.
After the courthouse was blocked off by police for over an hour, turns out, all the chaos was over a cookie.
“It was a packaged cookie,” said Height.
What kind of cookie, you ask? Police said they didn’t know.
Police said it was better to be safe than sorry.
“Precautions were take today in evacuating the courthouse, courting off the area was obvious in case it was a real possibly a bomb or something else to it so it was rendered safe using the bomb team and every caution we could,” said Height.
The courthouse opened back up for business at 1:30 p.m. and the cookie was confiscated just in time for lunch.
Share this article: