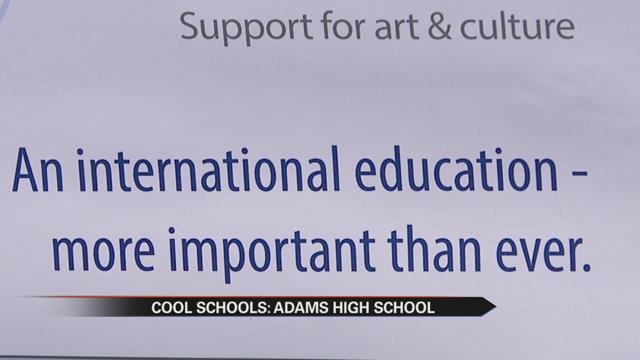 When students graduate high school, the goal is to be prepared for the next level of higher education.

John Adams High School has a magnet program called International Baccalaureate that is helping students become college ready before they ever walk across the graduation stage.

Alain Pierre-Jacques is in 12th grade and knew he wanted to get involved in this program back in 8th grade.

“I’m in six IB classes this year. I didn’t want to just regurgitate something. Anybody can just memorize something and then just spill it all out and then just forget it the next year,” said Pierre-Jacques.

“IB emphasizes understanding the whole picture and your place in the world through what you’re learning. My IB education was incredibly important to who I am and what’s important to me," said Maria Caponigro a 2013 IB Diploma recipient and now junior at Notre Dame.

For Caponigro, the education she received at Adams helped jump-start her for college and to later study abroad in Chile.

“I’m looking forward to going back to Chile and continuing my studies for a whole semester and learning more about Chile,” she said just days before she left to study abroad again.

During high school, a lot of her focus was on studying Chilean protests.

“As I was digging, I realized that the system they were protesting against is incredibly unequal but it is also very similar to the system we have here in Indiana,” Caponigro said.

She also attributes part of her success to the staff at Adams.

"My adviser was really instrumental in helping me explore my interests in education. I was really inspired by them to teach after I graduate because I hope that what they taught me will allow me to be a good teacher,” Caponigro said.

Aidan Reilly is a senior in the program and said he believes this has given him the opportunity at the best possible education.

For every IB class taken, students have to do extended essays and in-depth research, which will in turn help with writing and research skills prior to entering college.

“The kids answer the questions for themselves. They’re not just given the answers, the kids have to investigate a lot of things and then come to an understanding that they are comfortable with," said International Baccalaureate Program Coordinator Dr. Mika Roinila.

The IB program also allows for opportunities outside of the classroom. “People sometimes live in a bubble. There are many people who may have never experienced life outside of St. Joseph County,” Roinila added.

Students have seen history first hand at the Acropolis in Athens and run on the ancient track in Olympia. They have also visited London and China among other places.

“They ideally learn how to learn, appreciate others viewpoints, and accept the differences we find all around the world, where everyone with their differences can also be right," said Roinila.

The program begins in 11th grade and goes throughout the senior year. It involves six disciplinary areas including: English, foreign language, social science, experimental science, math, and arts. Students are also required to take a Theory of Knowledge class which is also at the core of this program.

Many students who get their IB Diploma are able to test out of many first year level college courses because they are so overly prepared for college.