Cops take down suspect after incident at Chuck E. Cheese's 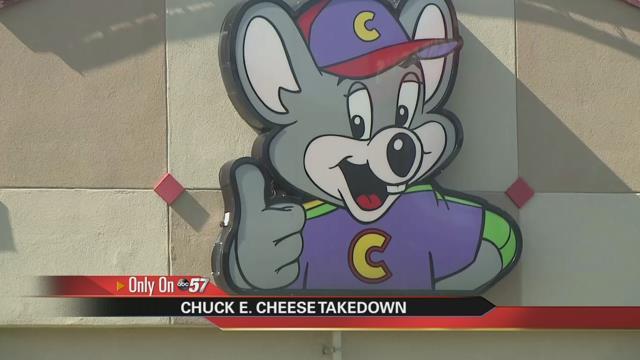 UPDATE to story below: On Tuesday Smith was arraigned for 6 felonies in Court.

count I: resisting law enforcement a class A misdemeanor

Cops took down a suspect outside Chuck E. Cheese's in Mishawaka after an employee called for help with a suspicious person taking photographs of kids in their restaurant. According to the arrest report, the man tried to run from police when they got on scene Saturday around 6:30 in the evening.

One witness, who didn't want to be identified, said he saw police use a taser on the suspect several times.

“The guy getting tackled down by at least a dozen cops, they had a hard time holding him down so they had to taze him several times.”

In the arrest report the suspect was identified as 26-year-old Dustin M. Smith who was arrested by Mishawaka Police for aggravated assault on two officers and resisting arrest. The prosecutor is reviewing those charges.

“I mean they were trying to hold him down, this guy was kicking and punching and swinging trying to get away and cops took all their might trying to hold that guy down. He was probably only 130 pounds and soaking wet. I don’t know where he got all of that adrenaline and energy at.”

The witness said the suspect was spitting, kicking, and punching the air and officers.

Two cops needed medical assistance for minor injuries they obtained through the altercation.

On Monday Chuck E. Cheese's was business as usual, but one mom said the weekend incident is worrisome.

Jessica Santiago said, “It’s very nerve racking, it makes me second guess if I even want to come here.”

The corporate office for Chuck E. Cheese's issued a statement about what happened, "Our manager called the police and the man was escorted outside of our location.  He then fled and was chased down by the officer on duty. The rest of the situation happened down the street and did not involve anyone at our location.”

Customers leaving the franchise said their kids come first and they are concerned about what happened.

Jackie Winston said, "I hope they pay more attention and it doesn’t happen again because this is one of our favorite spots”