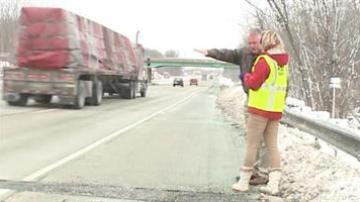 LAPORTE COUNTY, Ind. -- LaPorte County Coroner John Sullivan was one of the first people on scene of the I-94 pileup. Sullivan says because first responders got there so quickly, lives were saved.

What was once a sunny day in LaPorte County quickly turned into a dark nightmare as a chain reaction crash crushed everything in sight.

He went to the site with ABC57.

"We are standing where everything was yesterday. Yes you can still see marks on the pavement," said Sullivan.

He says it was a mess.

"Solid semis, 18 semis and solid cars all intertwined with each other, for about a 200 foot area in this whole region," said Sullivan.

Sullivan has been coroner in LaPorte for many years and says it was the worst he's seen.

"By far the worst accident I have ever seen in my career. We had to bring in buses to bus people to hospitals. We are just very, very lucky that we did not have more people killed. We are sorry that three did not make it, but thank goodness we did not have ten or fifteen," said Sullivan.

Sullivan says if it wasn't for all of the people who responded to help those injured so quickly, more lives would have been taken.