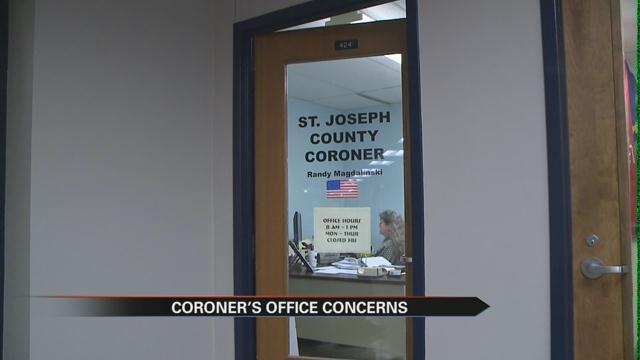 One main issue, there is no forensic pathologist.

As of May 1st, Dr. Joseph Prahlow, who was hired through the South Bend Medical Foundation, resigned from his position.

He performed forensic autopsies in both St Joseph and Elkhart counties.

Randy Magdalinski with the St Joseph County Coroner's Office says these are issues that need to be fixed.

Prahlow moved on to work in Michigan, at Western Michigan University in Kalamazoo.

Magdalinski says it won't be easy replacing him.

"One of the things that they need is a facility that their pathologists can do their autopsies without a facility you're not going to get a replacement for Dr. Prahlow, that's just not going to happen."

He says a new forensic pathologist won't even be hired until there is a solid plan in place to have a facility for that doctor to use.

That's the other dominant issue, no dedicated morgue.

"So we will have absolutely no morgue facility and no pathologist in the area to do any autopsies and that's kinda sad for the citizens of the community."

It's not just St. Joseph County, Elkhart County will be affected, too.

James Elliot with the Elkhart County Coroner's Office says it would be ideal to have a facility for Elkhart and St. Joseph County to use jointly.

He says he doesn't see that happening any time soon.

"Sure a facility right here would be nice if it was cost effective to our citizens, but I just don't see them being able to do it at a cost that we could come into."

In the meantime, with more bodies being sent to Kalamazoo pathologists I reached out to said they could handle it.

A representative from the Western Michigan University School of Medicine where these autopsies are being performed said in part:

“Although we did not originally plan on working with counties in Indiana, we are pleased to be able to work with them to meet their needs. Our goal is to provide strong forensic science support to any community in need, regardless of whether there is a state line involved."