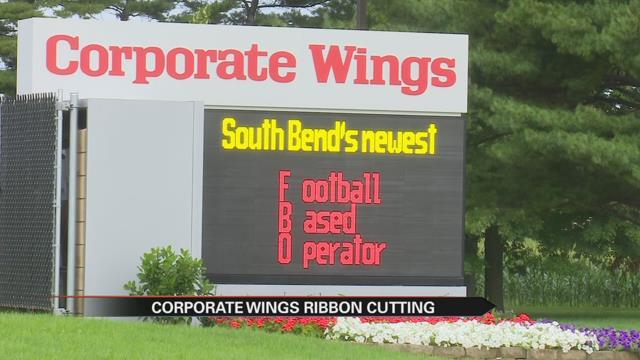 Private planes have a new special terminal to fly into at the South Bend International Airport.

Corporate Wings had its ribbon-cutting Thursday, right next to its big competitor, Atlantic Aviation.

“South Bend has always been a great airport for business aviation. That’s continuing to grow and we want to be part of that growth,” Randy Jones, general manager of Corporate Wings said.

Corporate Wings is a fixed base operator where private and company planes can fly in, fuel up, or stay in the city.

“We’re the concierge to the city,” Jones said.

They’re also the concierge to the Notre Dame stadium for some.

Jones says he expects visitors for football games to drive a large amount of traffic at his ramp.

Those visitors now have two private spots to choose from.

Atlantic Aviation has been opened for years, and it’s right next to the new Corporate Wings.

“They compete in the way they serve the public, and we think that’s a good front door for the community,” Mike Daigle, executive of the South Bend International Airport said.

Daigle say although Corporate Wings is a new competitor for Atlantic Aviation, the neighboring companies could benefit one another.

He says the airport has seen an increase in private flights into the city, and they accommodate those visitors for more than just game days.

“As the economy does better, work improves, as time becomes more important people use private jets to get going where they’ve got to be to continue to conduct business,” Daigle said.

Jones says he’s also ready for this friendly competition to take flight, and with his neighbors, he hopes to open the airport and the community to more visitors in general.

“We’re part of the growth that’s going on throughout the community,” Jones said.

Corporate Wings opened up about 14 new jobs within the community.