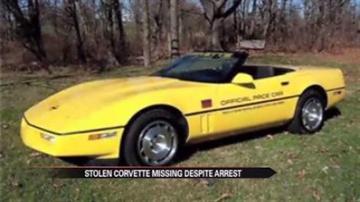 NAPPANEE, Ind. --A Corvette owner who wanted to put a new top on his beloved car turned to Craigslist for help. He found someone to help – and that was the last time he saw his car.

For Mike Stull, it was a match made in heaven.

"Love convertibles, and a Corvette; I love Corvettes,” said Stull.

He won the Corvette three years ago at a charity event at the urging of his wife.

Earlier this year, the car needed a little maintenance, so he went to Craigslist looking to save some money.

"I put an ad on Craigslist saying, 'Does anyone know how to put a top on?' and a guy contacted me and says, ‘I've done it before, I used to work in a top place,' So he said he could do it,” said Stull.

That was the last time Stull saw the car.

According to police the man who contacted Stull was 27-year-old Matthew Warman. He was arrested Wednesday.

"Through the course of the investigation, we determined the car was no longer in his possession; he was unwilling to cooperate and tell us where the car was at,” said Sergeant Bill Lynch of the Bristol Police Department.

The car could be anywhere and Stull is going back to where it all began to find it.

Stull says he’ll give cash on the spot with no questions asked.

Stull says according to General Motors, as few as 70 of the 1986 Indianapolis 500 pace car model corvettes were made in yellow.