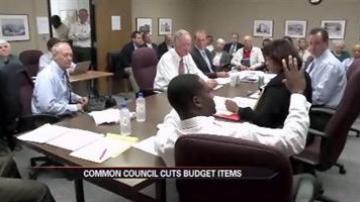 SOUTH BEND, Ind. -- Earlier this week the South Bend common council did something that hasn't been done in more than 20-years. It denied the mayor items he wanted on his proposed budget.

The city of South Bend started 2012 with new leadership with a new mayor and new members on the council.

According to colleagues, Councilwoman Karen White was instrumental in stepping up the council's oversight on the budget.

"With the new leadership that we've had on the council, there has been a more active desire to take hold of the government in that kind of sense because really, the citizens, the voters, have demanded that,” said Common Council Vice President Oliver Davis.

This push for greater oversight stems from a $9 million special projects bill proposed by Mayor Steve Luecke's administration just months before he was to leave office.

"That sent out a series of alarms that said, okay in this transition of one administration to another administration the city council is going to really have to take a look and really be more responsible for the budget in ways that we have not been before,” said Davis.

This year, Davis says the council sent freshman Mayor Pete Buttigieg a large message with a small number of cuts.

One of them was the part-time Director of Community Outreach position that would have paid $42,000 per year.

Davis says the council's days of rubber stamping the mayor's agenda are over and he is not the only one in charge of this city.

Just to put things into perspective, the mayor wanted to hire someone to work part time as the director of community outreach and pay them $42,000 a year. An entry level police officer makes around $38,000 per year and works full time.

In total the common council cut nearly half a million dollars from the budget.