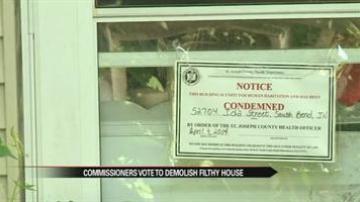 SOUTH BEND, Ind. -- It has been eight weeks since officials discovered deplorable conditions at a home on Ida Street in Clay Township, and Tuesday, St. Joseph County commissioners decided to tear it down.

Eight weeks ago, next door neighbor Phylicia Scott first noticed the smell coming out of her neighbor's home.

It was the smell of death that caused her to reach out to county commissioners.

Since that first phone call back in April, the Humane Society of St. Joseph County has made several house calls to remove nearly 50 animals, a couple of them deceased.

The home was so full of trash, feces, and animals, Scott says she felt unsafe to take her children, especially her infant son, outside.

"Just recently he received an upper respiratory infection and was almost put in the hospital, and it was due to air pollution," says Scott.

Commissioner's will meet again on July 8 to decide when that will happen.