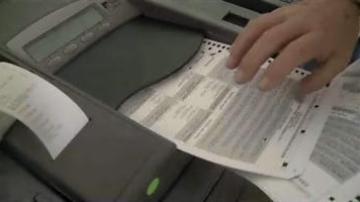 SAINT JOSEPH COUNTY, Ind.— With just two and a half weeks until Election Day, local governments are testing their voting machines.

Saint Joseph County stores about 240 voting machines inside a warehouse on Olive Street.

Friday workers pulled out 10 percent of them for a final test before Election Day.

Employeees with the clerk’s office inserted ballot after ballot testing the machines to make sure the receipts were accurate.

Each machine is labeled with its coordinating precinct.

All are tested equally. Some of the test ballots are blank, others have errors on them.

Even though all of these have been tested before, organizers say you can never be too accurate this close to the election.

“We have found, because we have had some close elections in the past, that there have been some contest of whether or not the machines were good enough,” said Jim Korpal, Saint Joseph County Election Board President.

“I've been doing this since 1995, and I think we had a problem one time with one machine when we tested it. So that's a pretty good track record,” said Korpal.

For the next two weeks, the county clerk’s office will keep training workers for Election Day.

They've already had 4 sessions and they've got 7 or 8 more to go before November 6th.