Couple charged with theft and burglary 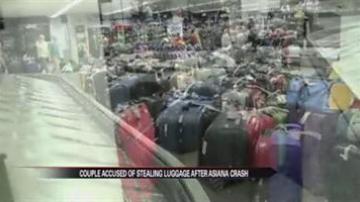 SAN MATEO COUNTY, Calif. — A couple is facing theft and burglary charges after being accused of stealing luggage in the aftermath of the Asiana Airlines crash.

Prosecutors say the two took the luggage of passengers who were diverted from San Francisco after the July 6 crash landing.

One of them works as a customer service representative for United Airlines.

Police say the two were caught after trying to return some of the items from inside the stolen luggage to Nordstrom's for cash.

"Our victim was well known in Nordstrom's, apparently," said Sergeant West Matsuura of the San Mateo County Sheriff's Office. "Nordstrom's contacted her, they identified the items going back and forth, and it was determined that the person who had returned them had no association with the victim."

Police say the couple was caught on surveillance video along with another woman taking the luggage.