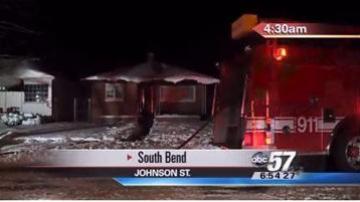 SOUTH BEND, Ind. – A South Bend couples’ home was destroyed in an early morning fire after old wire in a ceiling light shorted out and sparked a fire.

Crews responded to a call of smoke just after 4 a.m. Thursday on the 700 block of North Johnson Street.

Battalion Chief Al Kirsits said while the home may not look damaged on the outside, it is a completely different story on the inside. “Unfortunately these people aren’t going to be able to live there for awhile. We had to shut the electricity off and the water supply,” said Kirsits.

While they were not hurt in the fire, Kirsits said the now temporarily displaced couple was shaken up about their loss.

“ A real nice older couple. They’re pretty upset right not but we’re working with our investigators and with the red cross to get them some help and teach them how to get through the hoops here using the insurance company,” said Kirsits.

The Chief said the home’s heavy insulation masked the wires, and kept the smoldering fire going. Flames burned through the rafters and crews had to use a lot of water and pull the ceiling down.

“That blown in insulation has gotten wet and contaminated with products of the fire,” said Kirsits. “So that will all have to be removed by a professional company and restored.”

The fire was the third residential fire in just one shift for the crews with Engine Four.

Crews also responded to house fires on Lincolnway East, around 9 p.m. on Sunday, and Bertrand Avenue around 3 a.m. on Monday.