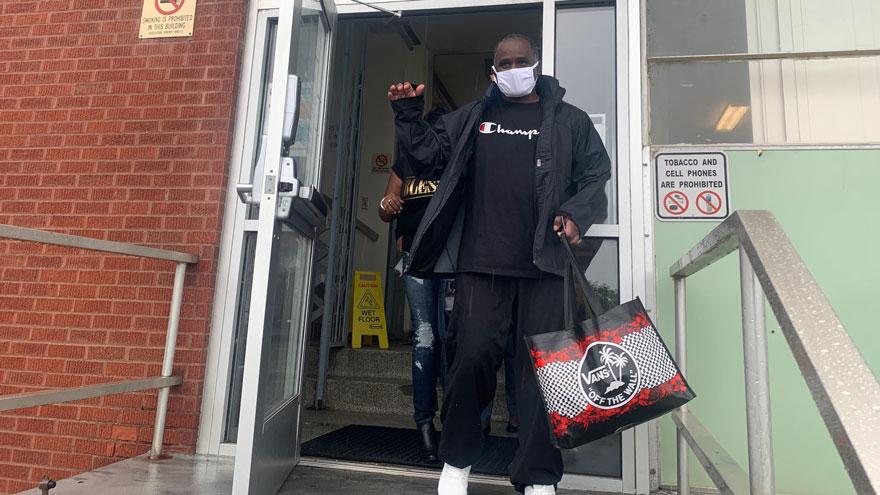 McCall, 39, had been convicted in 2005 of three counts of homicide, and assault with intent to murder. He was sentenced to life without parole.

His co-defendant, Andrew Miller Jr, was also convicted and is serving a sentence of life without parole.

The surviving victim of the robbery identified McCall at trial even though he only saw the profile of one of the individuals involved for two to three seconds.

In February 2020, the Michigan Attorney General's Conviction Integrity Unit received a letter that stated McCall was not responsible for the murder and mentioned three other people who were unknown at the time of the original investigation.

A new investigation was launched that included interviews with witnesses from the original investigation, new witnesses, a review of evidence and an interview with Miller.

Miller told investigators he and three other people broke into a home at 255 Parker Street to steal items. He said he intended to kill the occupants of the home during the robbery. He identified the other three people involved as Kehinde Wofford, Kenyon Wofford and Marlon Washington.

Miller said he knew the Woffords, but did not know Washington. The Woffords and their cousin, Washington, lived in Detroit and traveled to Benton Harbor that night to commit the robbery with Miller, reports said.

Miller said he was the one who killed the three victims and attempted to kill the fourth. He said McCall was not involved in the robbery or murders.

McCall has maintained his innocence and evidence obtained from Walmart corroborated McCall's statements about his whereabouts the night of the murder.

Kehinde Wofford, 45, is serving 60-90 years in prison for second degree murder and 50-70 years for kidnaping, assault with intent to murder and armed robbery for an incident that happened in September 2005 in Wayne County.

He is not eligible for parole until he is 93-years-old.

Charges will not be brought against Kehinde based on several factors including the length of his current prison term, he was not the actual shooter, and difficulties with bringing a case to trial 15 years after the crime.

Benton Harbor Director of Public Safety Daniel McGinnis, the lead investigator during the 2005 investigation, agreed with the Conviction Integrity Unit's conclusion and supported the motion to vacate the convictions.

“It goes without saying that it is tragic Mr. McCall has served any time in prison for this crime. Prosecutors in Berrien County make every effort to prevent this from occurring. In this case, Mr. McCall was convicted when the perpetrators of the crime had information of his innocence and waited until recently to disclose it. I fully recognize, however, that setting aside the conviction cannot begin to adequately compensate Mr. McCall for what he has lost. Nothing can restore his lost youth or return to him the years he spent in prison," Berrien County Prosecutor Steve Pierangeli said.

McCall was represented in Friday's hearing by an attorney with the Western Michigan University Cooley Law School Innocence Project.