Covert Public Schools saved but not without severe budget cuts 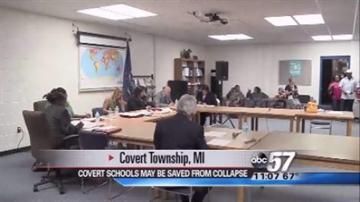 COVERT, Mich.-- Students at Covert Schools will have a school to attend this year, but it only comes after the school board passed one of the most stringent budgets in history, leaving students with the bare basics and 14 educators without a job.

Covert Public Schools had just two months before they would run out of money and be forced to close. It's all because the town's big employer, the New Covert Generating Company, failed to pay taxes last year. With a big chunk of property taxes missing, school administrators were scrambling to make ends meet.

“They did not pay the taxes that they were billed, that caught the district by surprise, and so they had to borrow against this year’s taxes, in order to finish out last year,” Covert Schools Interim Superintendent Gary Campbell said.

However, the generating plant insists they do not owe Covert Township anything.

ABC 57 reached out to the company that owns the plant, Tenaska Capital Management, and they issued this statement:

“Throughout this process, we have been, and will continue to be, committed to keeping lines of communication open in hopes that we can work with the township and county leaders to find an equitable solution that both meets their critical needs and helps maintain Covert Generating Facility’s position as a strong employer and contributor to the regional economy.”

Although classes will go on this year, the operating budget took a big hit. Extracurricular activities are out and a principal and 13 teachers were let go.

“It is going to be an austere budget, but we will have a Covert Public Schools,” Campbell said.

Board members say they have done everything in their power to keep the education thriving for students here.

“The school is the foundation of our community, so we definitely didn’t want to see it go. We worked as hard as we could to keep it here,” Covert School Board Vice President Diana Parrigin said.

ABC 57 also reached out to the public attorney Brian Knotk about the ongoing property tax dispute and he said both the district and the company made compromises to come to a solution.

This might not be the end of this dispute though. Superintendent Campbell said he still worries they may one day be forced to pay back that $2.5 million.