Cows caught on camera after escaping from CT farm 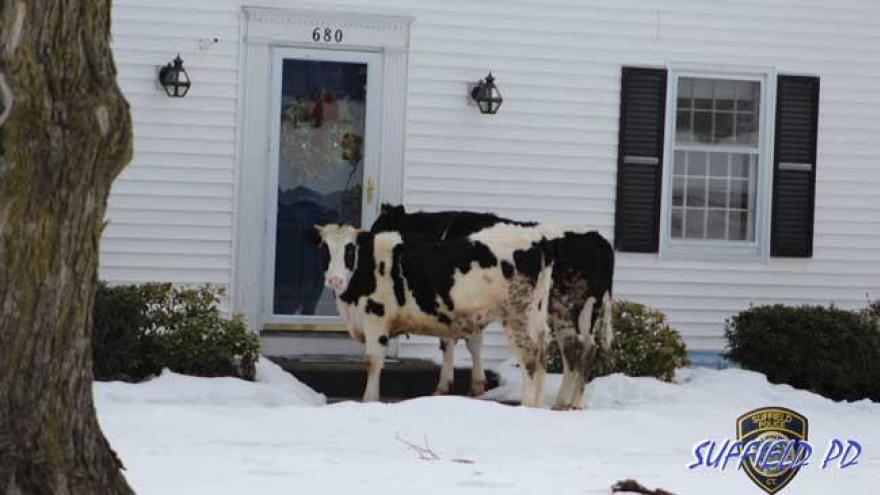 SUFFIELD, Conn. (CNN/WSHM) -- Suffield Police had a picture perfect moment Sunday morning after being dispatched on a call about cows on the loose.

They were originally called to the area of North Street/Rt. 75 after a vehicle driving by saw "some cows walking on the side of the road and in people's yards," Sgt. Geoffrey Miner said.

When officers pulled up to the scene, they found the cows standing outside of a home, right at the front door.

"When we pulled up that's right where they were when the picture was taken, at that person's front door," Miner told Western Mass News.

Snapping a photo, police then got the cows to safety.

"They came from a farm a couple of houses over, so with significant encouragement we herded them back to their pen, and got them into their enclosure," noted Miner.

So how did the cows escape?

"The cows got out because part of the fence was broken. It's an electrical wire fence, electricity was off, one of the wires was broken, so plenty of opportunity to escape," added Miner.

The chance encounter prompting police to post the photo to their Facebook page later in the morning...and they certainly had some fun with it too.

"Early this morning officers responded to a complaint of 2 suspicious males going door to door trying to sell dairy products. Officers determined that the 2 individuals did not have a solicitors permit and were apprehended after a short foot pursuit. We would like to remind everyone to NEVER open your doors to any unfamiliar cattle," Suffield, CT Police Department.