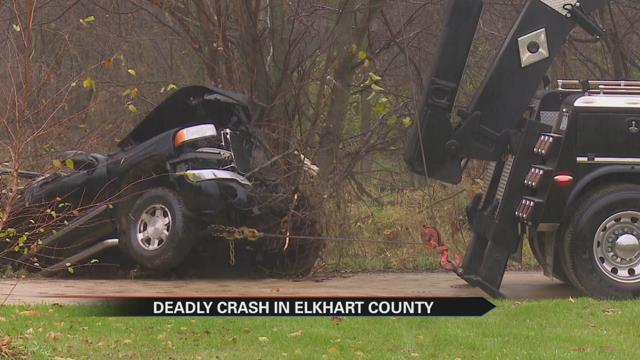 A Cromwell, Indiana man is dead after his pickup truck went off the road and crashed into a tree in Elkhart County overnight.

The preliminary investigation revealed Teel was not wearing a seatbelt.

“I came out on my porch and there was a guy going down the road and he stopped and told me to call 9-1-1,” Marvin Chupp, who lives near the accident scene, said.

It was an unlikely Monday morning wakeup for Chupp, whose call to police just before 10 a.m. turned a section of County Road 43 in Millersburg into a crime scene.

“I wish they’d put a stop sign up here instead of a yield,” Henry Yoder, who also lives nearby, said.

Neighbors said drivers often speed down the winding dirt road, not knowing what’s ahead of them.

“The road is narrow,” Chupp said. “They don’t realize how close it is to the river. And there’s quite a few kids who ride their bikes up and down the road, and stuff. I’m surprised things haven’t happened before.”

A small creek that connects to the Elkhart River runs directly next to the dirt roadway with no guardrail in between.

That spot is exactly where Teel’s black pickup truck landed after going off the road some time Sunday night, according to the Elkhart County Sheriff’s Department.

“We don’t have an exact time but we have some information that it may have happened a little later in the evening [Sunday] night,” Lt. Casey Lehman with the sheriff’s department said. “It was not found until earlier [Monday] morning.”

First responders found the truck tangled within the trees below street level.

A lengthy recovery effort and preliminary investigation revealed Teel drove off the roadway, went over the creek and struck a tree before his truck came to a rest on its side.

The truck never touched the water.

The damage to the vehicle was so bad, the fire department had to use the jaws of life to get to Teel’s body.

Teel was the only person in the truck.

It is currently unknown if speed was a factor.