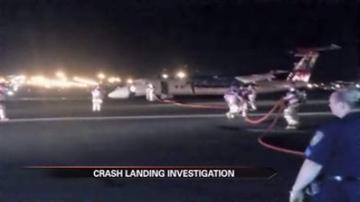 NEWARK, N.J. — Federal investigators are looking into a crash landing in New Jersey and a survivor is talking about her experience.

Crews say the landing gear failed on a US Airways flight Saturday.

The pilot was forced to land the plane on its belly.

One passenger says the flight was going smoothly until the captain came out of the cockpit and started looking at the wing with a flashlight.

The cabin filled with smoke but emergency exits allowed passengers to evacuate.

U.S. Airways says no one was hurt.