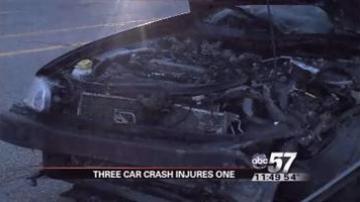 “They had to use the jaws of life to get the driver out”, said witness Nathanael Slater.

Witnesses say the driver of this car a woman in her thirties was driving northbound, when she did not see a man in his sixties, who was making a left hand turn into his driveway.  She rear-ended him into the other side of traffic hitting yet another car.

Neighbor Nathanael Slater says he was not surprised when he saw a wreck on his street, because his own mother and sister were in a similar accident.

“A couple years back they got in an accident right outside of my driveway”, said Slater.

He says they too were attempting to turn into their driveway.  He says he has an idea on how to stop all these accidents.

But he says ultimately it comes down to the driver to pay attention to road.

The U.S. 31 was closed off for about an hour and a half from New Road north about a mile.