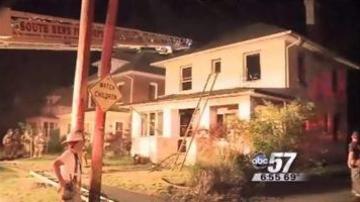 SOUTH BEND, Ind. – Fire crews had to put out a second fire at a vacant house in South Bend.

It first went up in flames around 1 o'clock Tuesday morning on Broadway Street. Firefighters even had to close down a part of Miami Street.

According to the fire chief, the fire was on the first and second floors and took about nine firefighters to put it out.

Firefighters also had to make a whole in the roof the let some of the heat out because it was so hot.

They say the fire rekindled under some insulation near the attic around 5 a.m. The hot spot was quickly taken care of.

One firefighter did have to be treated for heat exhaustion, but is expected to be OK. No one else was inside the building when the fire started.

Miami Street is back open. The fire chief doesn't know how the fire started, but expects investigators to be out later Tuesday.

Stay with ABC57 News for more updates throughout the day.