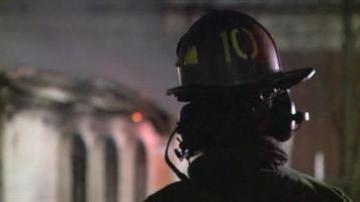 ELKHART, Ind. -- Fire crews were called to battle blazes at a business fire two different times within a 6-hour period.

Baugo Township Fire Department said they initially received a call about smoke coming from Quality Paints in the 28000 block of Old U.S. 33 in Elkhart around 8:20 p.m. Wednesday evening.

When they arrived, they extinguished a small fire inside the building, and didn't come across any apparent heat or smoke that could rekindle the flames.

Just before 3 a.m. on Thursday morning, a passerby called and said flames were coming through the roof of the building.

Firefighters say that the building was fully engulfed upon arrival, making access to the fire inside the building very difficult.

Crews also couldn't send men inside because the roof was collapsing, so they decided to use 2 ladder truck hoses positioned on opposite sides of the building.

The hoses were running non-stop from when crews arrived shortly after 3 a.m. until the fire was under control at 5:30 a.m.

The building is being considered a total loss. Fire crews said the owner has been informed and has insurance.

The State Fire Marshal is in the process of investigating the cause of the fire.