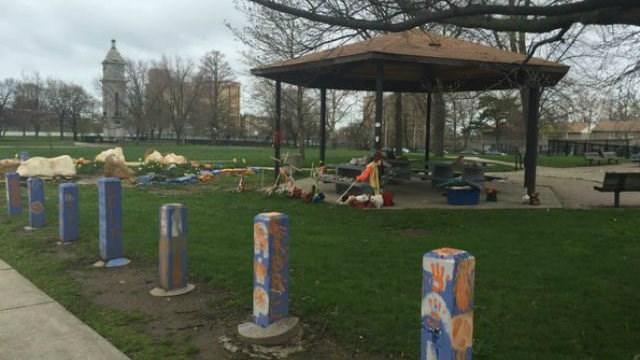 Cleveland, OH -- Deconstruction is underway at the gazebo at the Cuddell Recreation Center where 12-year-old Tamir Rice was shot and killed by Cleveland police in Nov. of 2014.

Wednesday morning crews will start tearing the gazebo down, but it won't be demolished. The gazebo will be preserved and moved to Stony Island Arts Bank in Chicago. Led by former City Councilman Jay Westbrook, several Cleveland leaders worked out a plan and had all of the services donated.

For the last two years, the gazebo has served as a memorial. People from all over the area and county have left candles, stuffed animals, flowers, photos and prayers to help keep Tamir's memory alive.

Tamir's mother, Samaria Rice, originally wanted the gazebo demolished but changed her mind after learning about the historic importance of preserving it.

Some are concerned that without the gazebo here, people will forget about what happened to Tamir. But Councilman Zack Reed says this goes beyond the local area.

There are plans to still memorialize Tamir at Cudell. Several have talked about putting a stone memorial in place of the gazebo but the plan is still in the works.

Crews started taking the gazebo down around 9:45 a.m, working through the light rain that started Wednesday morning. Several leaders and community activists attended, including Molly Nagin, who designed the Tamir Rice memorial garden, and Sgt. Major Stokes of the Black Man's Army.

Tamir was shot in Nov. of 2014 after rookie cop Timothy Loehmann and police officer Frank Garmback responded to a 911 call about a "guy" with a gun in the park. It turned out Tamir had a pellet gun.

Last year a grand jury decided not to indict the officers in connection to the shooting. The Rice family settled a "wrongful death" lawsuit against the City of Cleveland for $6 million dollars.