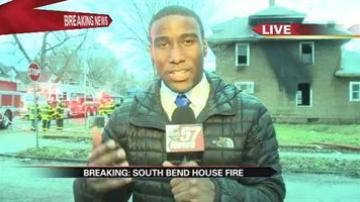 SOUTH BEND, Ind. -- South Bend fire crews responded to a fire in the 1100 block of Thomas Street by the Maple Street intersection around 6:15 a.m. Monday morning.

Firefighters believe the house was vacant because it was boarded up when they arrived. Crews actually had to extinguish several fires throughout the vacant property, including 2 on the first floor and at least 1 on the second.

First responders say their top priorty was preventing the fire from spreading to nearby homes.

A family with small children lived next door to the burning house.

Neighbors say they helped them vacate their home shortly after the fire began.

Crews had the fire under control within 30 minutes of responding to the call.

The Thomas and Maple Street intersection was closed until 7:30a.m., making it difficult for school buses to perform their daily student pick-ups.

Investigators are working to determine the cause of the fire.