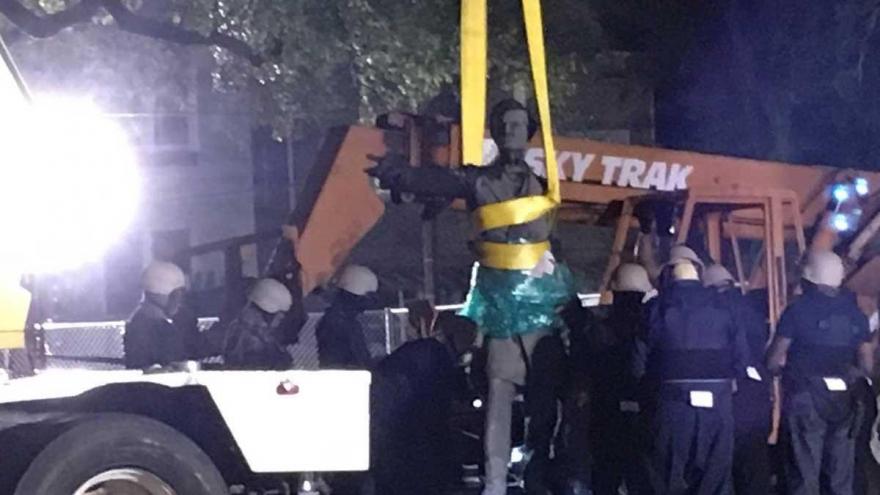 New Orleans, LA -- As expected, the removal of the Jefferson Davis monument on Canal Street and Jeff Davis Parkway started overnight with a heavy police presence and a large crowd of people gathered to watch.

The removal process began about 2:30 a.m., when dozens of NOPD officers moved crowds behind barricades across the street from the controversial monument.

Weeks after the city removed the Liberty Place monument - also overnight and cloaked in secrecy - the city has declined to give details on when the monument removals will take place, citing security concerns.

News of Jeff Davis coming down spread quickly Wednesday evening after the principal of Morris Jeff Community School sent a letter to parents asking them to drop their children off at a different entrance due to the removal of the monument.

The Canal Street streetcar line will be disrupted Thursday morning while crews work to take down the statue.

The Canal line will end at White street. Shuttle buses will operate from Broad to Tulane to Carrollton and back to Canal in both directions.

Jefferson Davis is the second of four Confederate monuments that the City Council declared a "nuisance" and decided to have removed. The remaining two -- the Robert E. Lee statue at Lee Circle and the PGT Beauregard monument at the City Park entrance -- will come down soon, city officials have said, though it's unclear when that will happen.