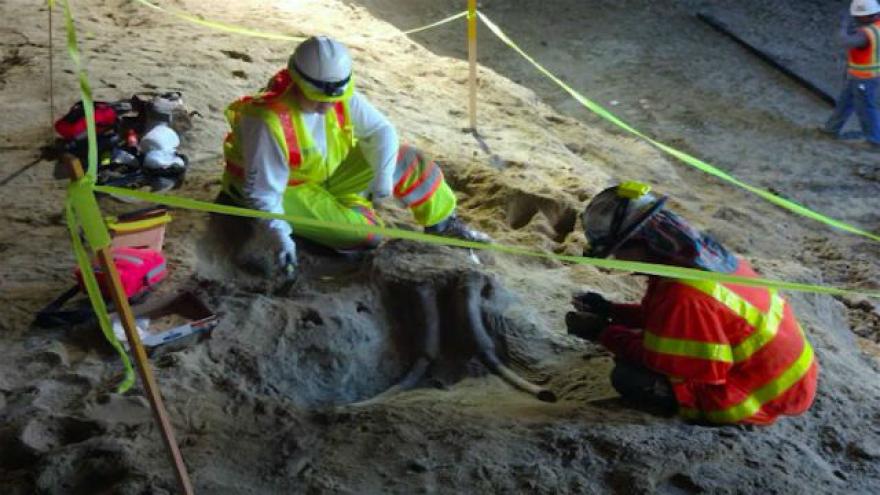 Dave Sotero, the spokesman for the city's Metropolitan Transit Authority's (MTA), summed it up best:

"The prehistoric past is leading the subway future."

The MTA's Purple Line extension project is meant, according to its website, to be a "high-capacity, high-speed, dependable alternative" for commuters to and from places like Beverly Hills.

The fact that crews are finding fossils isn't surprising.

The "project goes through the most interesting parts of L.A. where previous fossils have been discovered," Sotero told CNN.

In November, crews found a 3-foot section of tusk from an adult mammoth; teeth of a mastodon; and a nearly intact skull of a young mammoth. All within days of each other around Thanksgiving.

Later, in mid-April, a fossilized forearm from an extinct camel was unearthed. Then came a 36-inch long femur or thigh bone from either a mastodon or mammoth.

In May, they found a leg bone from a bison and a hip joint from a sloth. The sloth is suspected to be a Harlan's Ground Sloth, the largest sloth found at the La Brea Tar Pits.

Although ancient camels were once native to Southern California, their fossilized remains are rarely found around this area. The last ice age over 10,000 years ago resulted in the extinction of many large mammals across North America, including each of the species mentioned.

Throughout the life of the project, a paleontological team has been assigned to every subway station extension site. "The team is on staff at every excavation to monitor and stop any needed excavation work," Sotero said.

The fossils will more than likely be sent to the Natural History Museum of Los Angeles County.