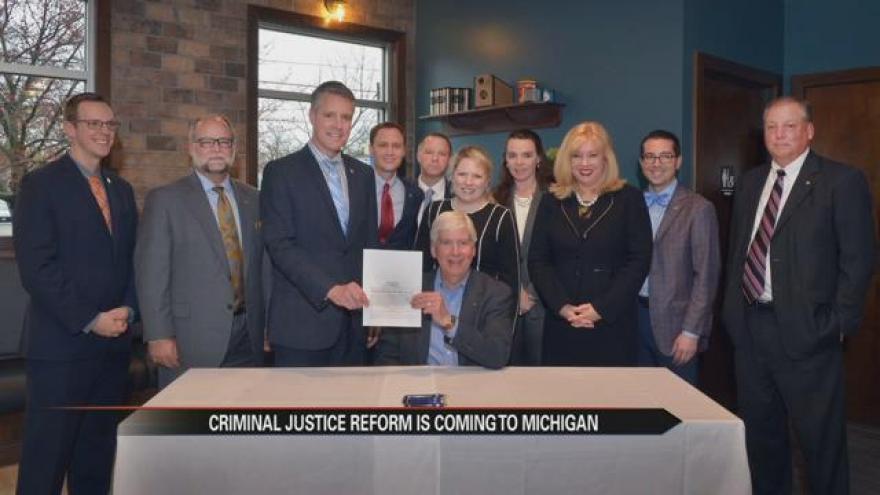 Michigan State Senator John Proos, of Berrien County, was the leader behind a criminal justice reform package that was signed into law Thursday.

“I never really allow a good feeling of finishing a project to kind of sink in because we’re already talking about the next phase of criminal justice reform in the state of Michigan,” said Proos, who represents Michigan’s 21st District.

Despite always moving forward, Proos did take a moment to pose with Governor Snyder on Thursday as the governor signed 18 criminal justice bills into law.

The new laws touch on several key criminal justice issues, with an overall goal of shrinking the number of people who end up back in Michigan prisons after being released.

Proos said the new ‘Parole Sanctions Certainty Program’ stands out most in his opinion.

“50-percent of the commitments to prison on an annual basis are failures on probation and parole in the state of Michigan,” he said.

This new program means tougher penalties for those who violate parole.

But instead of being thrown back behind bars, they’ll now go through intensive programs that have been proven to be successful for high-risk probationers.

Proos said the new laws impact everyone in Michigan, even if you don’t have a loved one in prison or on parole.

Governor Snyder did veto two of the 20 bills in the package.

One would’ve reorganized how data is collected in the criminal justice system.

The other would’ve reshaped how empty beds in jails are used.

Proos said the governor told him he’s willing to discuss amending them.