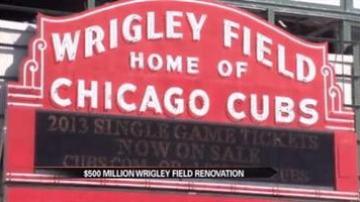 CHICAGO — The Chicago Cubs and the city of Chicago appear to have reached a deal concerning the long-awaited improvements at Wrigley Field.

The $500 million deal will include improvements to the 99-year-old stadium that will include a new video scoreboard in left field and at least two new signs inside the ballpark. Also include is plans to build a 300-space parking garage.

The deal is expected to be finalized by Monday's home opener.