Cut off from the world! Neighborhood loses power after teen plows into power line 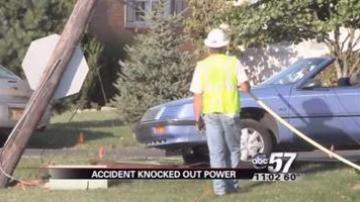 SOUTH BEND, Ind. - Cut off from the world! An entire South Bend neighborhood was without power, internet and cable for hours last night.

It all happened after 18-year-old Emily Plencner lost control of her car and crashed into a power pole.  The accident happened at Crumbstown Highway and Pecan Road, just after 5 p.m. Tuesday evening.

A.E.P was on scene for hours installing a brand new pole, finally restoring power to the neighborhood late Tuesday night.

Chuck Hofer and his wife Judy were inside their house when their power suddenly went off, but it wasn't until their gaze drifted out the kitchen window that they realized why.

"Sure enough I looked out the window and saw a pole at a 45-degree angle and I said, yea that'll do it!" says Chuck Hofer.

The power pole dangled just above the blue convertible that sat crumpled underneath it, with power lines draped all around it. The teen told police she lost control car after her brakes went out while she was making a right-hand turn into the nearby neighborhood.

"Judging by the skid marks she did in fact have brakes," said St. Joesph County Sheriff Michael Grzegorek. "Whether she panicked or was going too fast is hard to determine, but she definitely missed the turn and slid straight into the pole when she locked up her brakes."

According to deputies, the driver only had minor injuries and was taken to Memorial Hospital as a precaution.

However, the accident left over 70 people without power, and close to 200 people without internet, a phone line, or TV.  The Hofers say this isn't the first time they have had their power knocked out.

"We have lived here a while and it use to happen all the time, and when the tornado hit, we were without power for days!"

After being without power for days, the couple says not having power for a few hours doesn't seem so bad. Still, they admit it is an inconvenience.

"Well, without electricity, there is no water from the well, so you can't wash up and you can't run the water to get a glass of water."

AT&T was also on scene when the accident happened, but they said it was too dangerous for their crews to work under the dangling pole.  They will be back sometime tomorrow to fix the cable, internet, and phone lines for folks in the area.