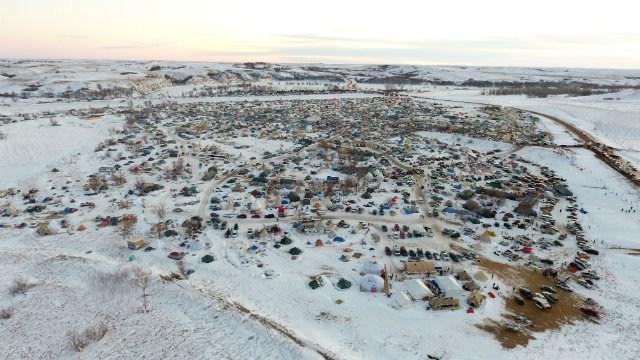 NEAR CANNON BALL, North Dakota (CNN) -- The fight against the Dakota Access Pipeline -- the $3.8 billion project expected to move 470,000 barrels of crude oil a day across the Midwest -- lasted long enough for the summer heat to give way to thick, white snow.

For months, Standing Rock Sioux tribe members and their allies battled the energy project they referred to as a "black snake." They stood in the path of the pipeline both during peaceful actions and clashes with authorities that turned violent.

On Sunday afternoon, tribe members and their allies cried tears of joy after the US Army said it would not -- for now -- allow the pipeline to cross under Lake Oahe in North Dakota.

The Army says the plan should be carefully restudied, and alternative routes should be more deeply considered.

The Army's statement does not rule out approval for the current plan in the future. And with President Obama leaving office in January, many questions still remain about what's next for the project.

Why are Native American leaders celebrating?

Tribe members say that an oil spill at the lake would contaminate their water supply. The tribe's reservation lies a half-mile south of the proposed crossing location.

They also say that the construction would cut through sacred land and destroy burial sites.

The Army's announcement Sunday afternoon came one day before a looming deadline for protesters. North Dakota's governor had ordered protesters to leave their campsite by Monday, citing harsh weather conditions.

The Army Corps of Engineers also had warned that activists could be arrested if they hadn't left by Monday, but the agency later said it had no plans to forcibly remove those who stayed.

As the deadline approached, protesters prepared to stand their ground in the face of a potential forced removal. After hundreds had camped out at Standing Rock for months, thousands of reinforcements -- including US military veterans -- had flocked to area over the past week in a show of solidarity.

"People have said that this is a make it or a break it, and I guess we made it," Chief Arvol Looking Horse, Keeper of the White Buffalo Calf Pipe.

Far from it. For now, Jo-Ellen Darcy, the Army's assistant secretary for civil works, said in her letter to the Corps that the proposed crossing at Lake Oahe requires more analysis, including a deeper consideration of alternative routes.

"A more robust analysis of alternatives can be done and should be done ... before an easement is granted for the Dakota Access Pipeline to cross the Missouri River on Corps land," Darcy wrote.

Darcy called for the creation of an official environmental impact statement, a months-long process that would allow the public to weigh in.

She did not announce a timetable.

It's not exactly clear. Darcy did not propose alternate routes.

Her letter noted that one previously proposed alternative -- having the pipeline cross the Missouri River about 10 miles north of Bismarck, the state capital which itself is well north of Lake Oahe -- was eliminated early in the planning phase.

The current proposed route would stretch 1,172 miles from North Dakota into South Dakota, slithered through Iowa and ended in southern Illinois.

Energy Transfer Partners and Sunoco Logistics Partners, the corporations behind the Dakota Access Pipeline, said in a statement Sunday night they "fully expect to complete construction of the pipeline without any additional rerouting in and around Lake Oahe."

"Nothing this Administration has done today changes that in any way," the company said in a statement.

Is the fight over at Standing Rock?

While Sioux supporters may have celebrated a huge victory Sunday, they're already looking ahead toward potential fights ahead over the pipeline.

"So it feels good I'm really happy that I'm here to witness it and celebrate with a lot of my elders and the youth, but I think that we also need to keep in mind that we need to be ready to keep going," protester Morning Star Angeline Chippewa-Freeland said.

Iktce Wichasa Oyate, a small group that has provided security for protesters, called the decision Sunday nothing more than a "delay tactic" designed to "diffuse the power of the camp." They now hope the project gets stopped entirely before a new plan under a new administration gains traction.

"The snake is trying to move from the open field, to the tall grass," the group said in a Facebook post. Watch it carefully, there will be a new snake handler soon."

President Obama is about to leave office. What happens with Trump?

"More threats are likely in the year to come, and we cannot stop until this pipeline is completely and utterly defeated, and our water and climate are safe," Dallas Goldtooth, lead organizer for the Indigenous Environmental Network, said in a statement.

"If Trump tries to go up against the leaders at Standing Rock he'll just end up looking petty and small," she said. "The fight against Dakota Access has fired up a resistance movement that is ready to take on any fossil fuel project the Trump administration tries to approve. On Dakota Access and every other pipeline: If he tries to build it, we will come."

Jason Miller, spokesman for the transition team of President-elect Donald Trump, said Monday that the pipeline is generally "something that we support construction of." The Trump administration will review the matter after the inauguration, Miller said.