Dancing with the Stars films in Michiana 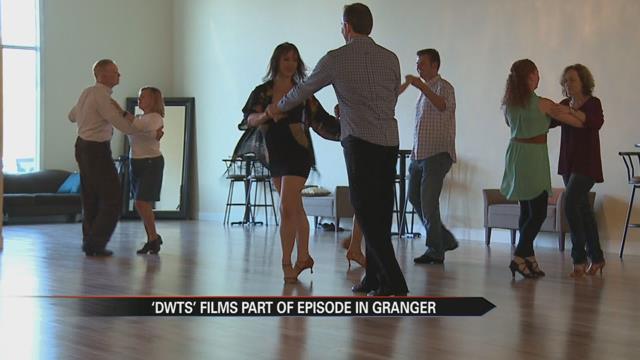 The Dancing with the Stars crew filmed a rehearsal between country singer Jana Kramer and her professional partner Gleb Savchenko in Granger.

Kramer was in the area for a performance at Legends of Notre Dame on September 2nd. While in town, the pair rehearsed at DanceSport Academy of Granger.

Owner Rachel Len has been at the Florence Avenue location for only two months, she was thrilled to host the show.

“It’s so great because I feel like Dancing With The Stars just gives people exposure to what ballroom dancing is and it very much shows that you can never dance before and then six weeks later you’re on the floor in rhinestones,” said Len.

Len’s studio specializes in Latin, ballroom, and swing dance. All ages are welcome but Len says the majority of the dancers are adults. Many, like Joyce Simpson, began taking classes later in life.

“I thought it would be something that I would just do for the moment because it looked like fun, but, I liked it so much that I kept at it and at this point I just can’t imagine not doing it. It’s like if you’re a golfer it pretty much becomes you’re life, that’s pretty much what dancing is for me,” said Simpson.

They come to classes at DanceSport three or four times a week.

“We discovered that ballroom dancing was every bit as much of a challenge! Well you have to work through things. Listen to each other and communicate,” said Mary Haas.

DanceSport will host an open house on Saturday from 7 – 10 p.m. featuring a meet-and-greet with Tony Meredith of So You Think You Can Dance and Dancing With the Star. For all the information, click here.