Day two: Continuing coverage of the Irish in NYC 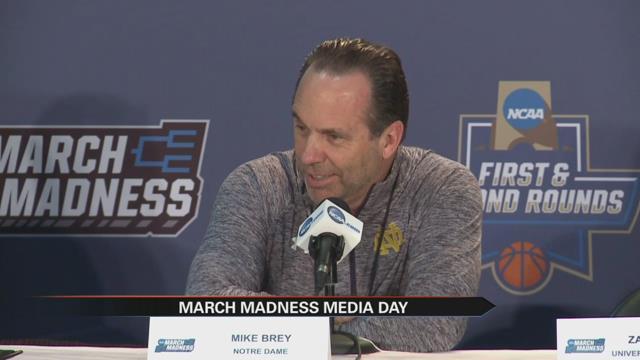 March Madness is now in full swing, and the 6-seed Notre Dame men’s basketball team is preparing to take on the 11-seed Michigan Wolverines in the first round of the NCAA tournament in Brooklyn Friday night.

“Two schools don’t like each other,” says Irish alumn and New York native Eamond McAnaney. “Michigan fans root against Notre Dame. I think it’s great that we get to see them [Notre Dame] 20 minutes from our house. Hopefully they’ll make it to Sunday as well.”

The Fighting Irish first have to get past long-time school rival, Michigan, which gives the two teams a boost.

I think there;s a little extra energy,” said Notre Dame Head Coach Mike Brey.  “There was a week-long build-up, even though Michigan still had to win, and they did a heck of a job.”

On the football field, it’s a long and storied rivalry that stretches back into the 1880s.

On the other hand, the last time the basketball teams met was a decade ago 2006, and they have only met 22 time with the Wolverines leading the all-time series 15-7.

“Football has been a good rivalry for years, and I know it will be at some point,” said John Beilein, Michigan Head Basketball Coach. “But Mike and I, if we didn’t have such a structured schedule, it would be a great game.  It probably will be in the Big Ten and ACC Challenge at some point.”

Regardless of rivalry and record, the Irish players know Friday’s game will be a dogfight.

Heading into Friday’s first found game, the Irish seem loose, but they are focused on what they need to do to survive and advance in the tournament.